My mind was blank on this night as I traversed the labyrinthine caverns of Madison Square Garden to find my seat. Any sense of anticipation I had for this show had dried up somewhere in between the daily grind, oppressive summer heat and debate about Maiden's setlist. I was joined by my cousin Art, trusty Jeremiah and one of Jeanne Fury's clones (how do you think she can be in so many places at once?) This would be my fifth pilgrimage to the altar of the beast, and it would turn out to be a surprisingly satisfying experience.

Dream Theater bounced onto the stage enthusiastically and were clearly excited to be playing The Garden. They started out with “As I Am,” a track from the album that completely turned me off to the band in the not so distant past. I suppose I'm hot and cold with Dream Theater; I enjoy their earlier material and became a desperate fanboy circa Scenes From A Memory. I had a blast with Six Degrees of Inner Turbulence, but I lost the script after that.

I've seen Dream Theater with excellent acoustics on three previous occasions. I thought the booming echo of the arena did a serious disservice to the intricacies of their sound. On top of that, James LaBrie's voice sounded strained at times, at least to my ears. I've tried a couple of times to get into the newer material that comprised most of the set, but I haven't had much success. 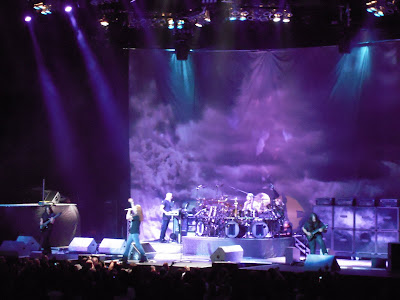 The young folks sitting around us appeared to be in rapture. Their reaction at the start of each Dream Theater song was almost double rainbow enthusiastic. I tried to soak in their glee to no avail. Throughout the set I watched the GA pit writhing with bodies and lamented my failure to secure a spot on the floor. I usually avoid arena shows on principle, as distance dims the intimacy I appreciate at metal shows. That distance seemed to be a void for me with Dream Theater on this night. Even the anthemic “Pull Me Under” couldn't pull me out of my stupor. 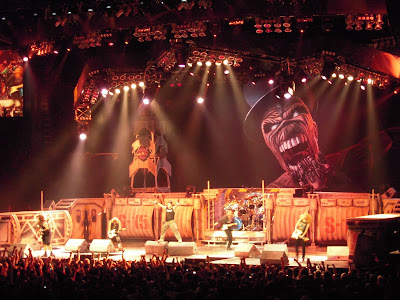 I love all of Iron Maiden's post-reunion albums, although my enjoyment has decreased slightly with each successive LP. I personally think Brave New World is a classic album; it came out at a singular time in my life and those tracks hold plenty of personal meaning. When the band came out and ripped straight into “Wicker Man” and “Ghost of Navigator,” I was definitely smiling. 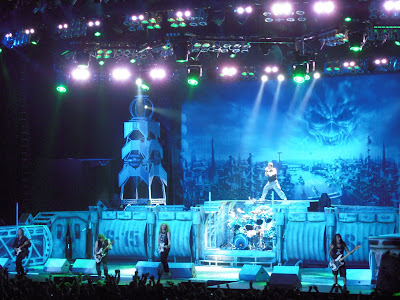 An Iron Maiden concert is a communal experience. This band is capable of turning 20,000 people into a single ecstatic, headbanging organism. I don't think you've really lived until you've sung the guitar melodies to “Fear of the Dark” along with an arena full of people. Each member of the band shares a stake in these powers, but it's really Bruce Dickinson that puts Maiden over the top. His boundless energy and enthusiasm are important, but it would all be for shit if he didn't pull off a pitch perfect vocal performance every time. 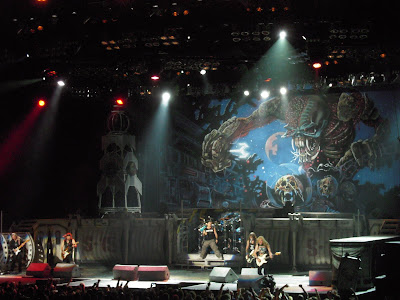 For what it's worth, our elevated seats gave us a good view of the crowd. Fans old and young were screaming, singing, dancing and throwing copious horns throughout the show. A fellow across the aisle from Jeanne Fury seemed to be having an imaginary dance-off the entire time. The crowd was surprisingly enthusiastic about the newer material. I think the post-millennial tracks served to frame the classics in a nice light. 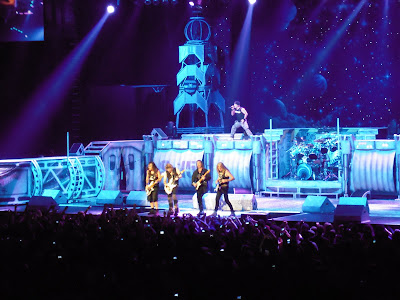 I was certainly rewarded for having no expectations about this show. The newer songs sounded fresh and exciting to my ears. The band had been rotating a few songs in and out of the setlist early in the tour, but later abandoned the idea. I would have killed to see “Paschendale” live, but it was a casualty to the cutting room floor. I really shouldn't complain, though; this was a fantastic show and a fantastic night.
Dream Theater Iron Maiden Madison Square Garden