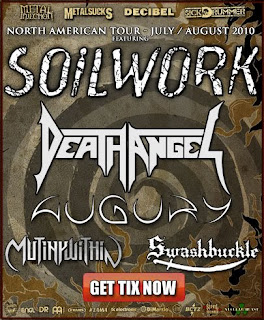 What a night. I love Swashbuckle, dig Augury, admire Death Angel and celebrate the entire Soilwork catalog, so I was pretty excited for this one. I rode solo on this evening, queuing up outside the venue on a line that stretched around the corner. I instantly felt like a geezer; clearly the crowd for this show was quite young. At the same time, the heat and humidity were preposterous; precious fluids were dripping onto the pavement outside the Gramercy Theater. My only hope was for decent air conditioning in the venue. Not gonna happen.

Once inside the theater I headed straight downstairs to the merch area, which was mobbed. Barred a view of the precious booty, I went into the bar to start drinking. It probably wasn't the best idea. In the lounge area I heard some mopey hipsters complaining about Swashbuckle's pirate regalia. I'll defend this band to the noose, but I was still too sober to engage in a conversation with these fine individuals. 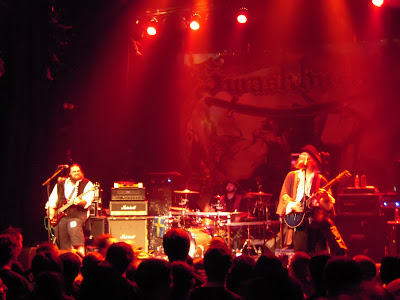 Back upstairs, Swashbuckle's intro music garnered quite a reaction from the growing crowd. The thrash pirates tore straight into tales of pillage from their latest album. A righteous circle pit rotated throughout the band's set, providing a nice breeze in the sweltering corner I had claimed. All the folks around me were plastered with smiles during the plundering performance. The sound was great, but the band sped through each song as if they had one eye on the clock. Clearly there were too many bands on this bill, and Swashbuckle was the first victim. Believe me, “Cruise Ship Terror” was a ripping good time, but the increased velocity of the songs diminished some of the groove that gives these tracks life. Still, it was a great time, and I can't wait for a new album from the pirates three. 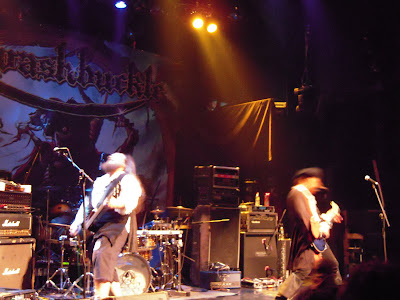 Between sets I acquired more alcohol and met up with Justina Villanueva, present as usual to shoot the madness. Mutiny Within took the stage quickly and proceeded to plow through a set that drove the kids wild. I enjoyed the band's debut album quite a bit, but in a live setting Chris Clancy's clean vocals came off a bit too syrupy for my tastes. Some of the young folks seemed to swoon as if we were witnessing a boy band in action. It was very strange. During the set, I started to notice some animosity amongst the rest of the crowd. One guy was doing sit-ups on the floor as if to exhibit a manliness superior to Mutiny Within. Cat calls and heckling were also going on and were genuinely uncalled for. The band persisted admirably and put on good show. 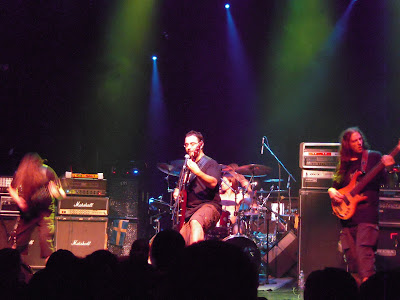 At first pass, I didn't take to Augury's Fragmentary Evidence last year. The album did grow on me though, and I ended up buying it recently. The LP sports some absolutely brilliant moments of technical/progressive death metal, and I was looking forward to catching it live. Augury sounded fantastic. The material really shined in person, but again it appeared that the band was rushing through the set. Front man Patrick Loisel is an eccentric dude, to say the least. He played his guitar upside down, flashed the finger at the crowd, cursed at us and delivered some seriously demented stage banter. Unfortunately, his vocals were almost completely buried in an otherwise decent audio mix. Also, the crowd was absolutely dead for these guys. I'd definitely like to see Augury again with some more enthusiastic fans.

Somewhere during the evening, in an increasing state of inebriation, I was introduced to the dudes from MetalSucks. We had some excellent conversation, as far as I can recall. Very nice guys, but I think the heat, dehydration and drunkenness must have dimmed my recollection of what was said. I do remember talking about the infamous Ziltoid as well as misidentifying the next band as Dark Angel. No, Gene Hoglan was not playing tonight. 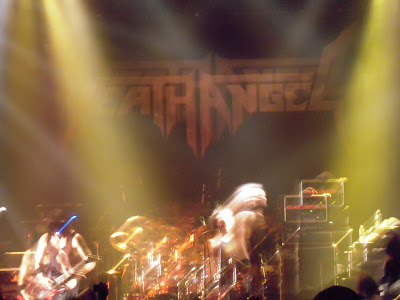 My interest in Death Angel never really progressed beyond The Ultra-Violence and Act III, but I was definitely psyched to finally see them live. As the band came out, it was evident that plenty of old folks had showed up for this concert; they had just come fashionably late. The audience was a berserk mess of moshing, crowd surfing and brief circle pits for Death Angel. 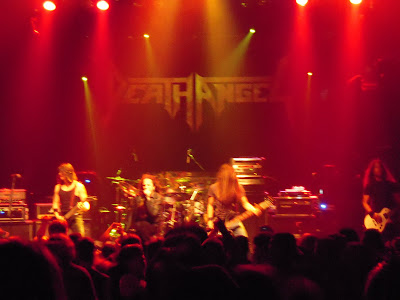 The two albums Death Angel put out since their reunion didn't really grab me. Those songs were pretty compelling live, however. The few older songs they played garnered a rabid response from the audience. There's no way in hell you can't wreck out your neck for classic tracks like “Kill as One” and “Seemingly Endless Time.” The sound was pretty much awful during Death Angel's set; the guitars were so loud that they almost defeated the thrashiness of the music, but not quite. Mark Osegueda's vocals were barely audible, but he seemed to be having a great time. By this point I think I was having dehydration hallucinations; the awful pictures I took of Death Angel can attest to that. Still, it was a rockin' good time.

I was so beat after Death Angel that I almost considered skipping Soilwork. The blazing, fetid air inside the Gramercy Theater was just wretched. I doused myself with water in the bathroom and retired high up into the merciful stadium seating to chill out. 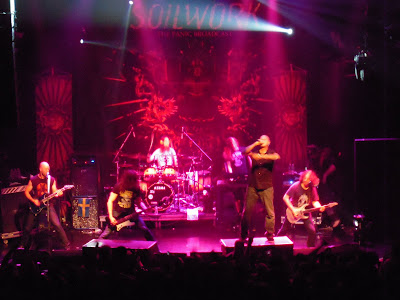 I suppose Soilwork is a guilty pleasure for me. I jumped on board with The Chainheart Machine and have been hanging around ever since. Peter Wichers' departure definitely diminished my enthusiasm for the band, but he thankfully returned. I saw Soilwork last year at The Chance, playing what was essentially a greatest hits playlist. I pre-ordered The Panic Broadcast and I'm still thoroughly enjoying it. I was really here to hear some new songs. Much new tunage was had. 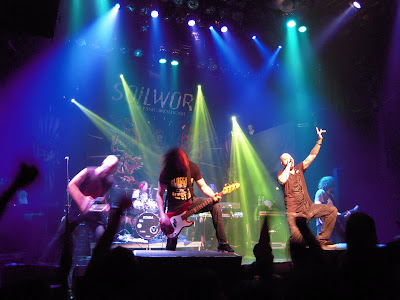 Soilwork hit up the new album immediately, playing “ Late For The Kill, Early For The Slaughter” and then “ Night Comes Clean.” I've said it before, but I really dig Björn "Speed" Strid's voice. He fucking brings it live, perfectly reproducing his perilously saccharine melodic vocals. The audio mix was pushing into the red for Soilwork, but it was much better than Death Angel's sound. After a few tracks, the crowd's raucous energy drew me down from my perch, and I waded back into the pit. 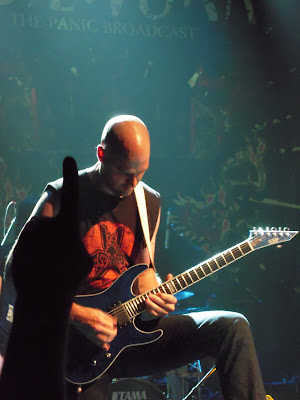 Peter Wichers is a riff-machine and a joy to witness in person. His solos rose satisfying above the din to be perfectly audible. Some folks definitely left after Death Angel, but the floor was packed with enthusiastic maniacs throughout this set. We ended up getting five new songs in addition to venerable tracks like “Chainheart Machine,” “ Follow The Hollow” and “ The Flameout.” You could get upset they played nothing from A Predator's Portrait, but I think we can blame that omission on the overburdened bill. I had a great time, and I survived. Somewhere along the way I scored a Swashbuckle beer-coozie. What more do you need in life?
Augury Death Angel Gramercy Theater Mutiny Within Soilwork Swashbuckle