Man's Gin were just starting their set when I got to Webster Hall. I really dig Cobalt, and I've previously expounded upon the virtues of Erik Wunder's clean vocals. The Man's Gin tracks I checked out before the show were quite promising, so I was interested to hear the results in person. I was surprised to see a full band on the stage, replete with stand-up bass and a rickety looking piano. Lacking a proper vernacular to describe this music, I'd have to say the tunes were beautifully depressing. These are songwriter's songs. The frequently simplistic acoustic chord progressions are elevated by Erik Wunder's fantastic vocals and the musical accents provided by the rest of the band. Harmonizing vocals were frequently tossed in by the other band members to create an engrossing soundscape.

Despite the down-home Americana in progress, this was still a metal show. It was nice to see that the venue was nearly full for Man's Gin, and that people seemed to appreciate the music. Chillness was the predominant vibe, but that was about to change. As Castevet set up, I chatted with the guys from Krallice (minus Colin, who's on tour with Dysrhythmia). They were originally on the bill for this show, but the obvious scheduling conflict turned them into spectators. I noticed that the same sound guy from last week was manning the board on this night. I prepared for aural annihilation. Castevet delivered. 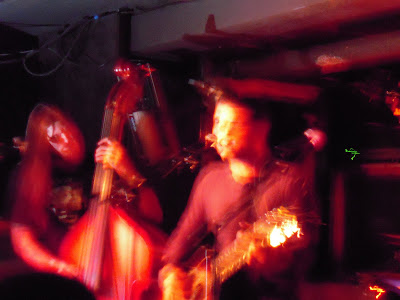 Andrew Hock led his band through a roaring set of tracks from Mounds of Ash. I kid you not when I say this was the loudest performance I've ever heard. Ian Jacyszyn's drums slapped us in the face while Josh Scott's bass kicked us in the chest and vibrated the air in our lungs. This was louder than Pantera in an arena. Absolute ear-crushing madness. It actually sounded great with earplugs in, but I wept for any unprotected eardrums in the crowd.

I'm a huge fan of Mounds of Ash. The rhythmic intensity of the album was on full display via the pulverizing volume. It was totally over the top and totally metal. You could feel these songs with your entire body, and my neck got into the act. Castevet is for banging heads. Andrew Hock embodies the intensity of his music, vibrating with energy as he barks out his vocals. This was a whole lot of fun to witness.

That set required a breather, and thankfully re-entry is allowed at The Studio. Velnias set up their gear and wreathed the stage with candles. The band were the dark horse for me on the tour. I'd checked out some tunes on their Myspace page and was intrigued. The tunes made me wonder what Opeth would have sounded like if they'd pushed into the forests of black metal circa Morningrise. The band set up in a curious configuration, with a guitarist and bass player facing inward on the stage, effectively presenting their backs to the crowd. Sure, it was eccentric, but I don't mind that kind of stuff. 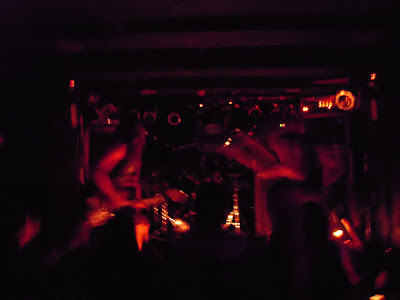 Velnias started their set with a new 22 minute long track. It comes from the the self-released single the band are selling on the tour (I couldn't resist picking it up). The packaging gives no indication of the song's name, but it's all win. Once the band churned through the sparse, clean intro, they sprinted off into forests of rage. The sound was slightly less bold for Velnias, but the dark room, cool air and throbbing bass created a fantastic atmosphere. I was blown away by this set. Velnias are black metal filtered through post-rock harmonies and crushing rhythms with passages of sustained speed thrown in. The crowd was engrossed, with hair flying. The set of windmilling manes in front of me added an extra breeze to the chilled air. The band played a few more tunes, including one from their 2008 full-length album, Sovereign Nocturnal. I had a blast.

When Altar of Plagues' White Tomb came out last year, I was over-saturated with ambient black metal. I knew there was something great there, but it was something I'd have to come back to at a later date. Their Tides EP, however, had an immediate impact for me; it knocked my socks right off. I've been spinning these songs constantly with growing anticipation for this show. The passion James Kelly puts into the composition of this music is obvious, but in a live setting that emotion manifests as a quivering, uncontrolled rage; Altar of Plagues are better in person than they are on disc. 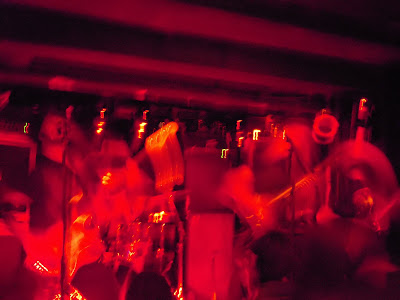 Having adjusted my audio expectations for The Studio, I thought the sound was perfect for Altar of Plagues. The band played on a darkened stage, bereft of even candles, again producing a vivid impression of a subterranean ritual. Everyone around seemed to be banging their heads in time to the rolling, mellifluous tunes. Several tracks from White Tomb accompanied the marathon excellence of “Atlantic Light” from the Tides EP. While bass player D. Condon provided throat shredding gurgles through most of the tracks, James Kelly contributed the absolutely anguished semi-clean screaming that elevates this track to greatness. 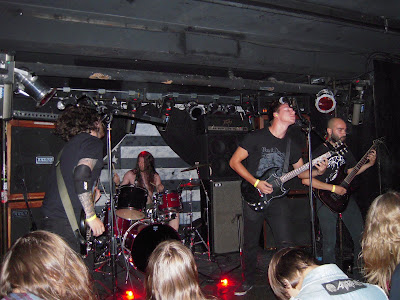 I thought it was a transformative performance; this was the kind of show where you walk away breathless in the knowledge that you've witnessed something truly great. There are only a few dates left on this tour, but I highly recommend getting out to see Velnias and Altar of Plagues. You won't be disappointed.
Altar of Plagues Castevet Man's Gin The Studio at Webster Hall Velnias