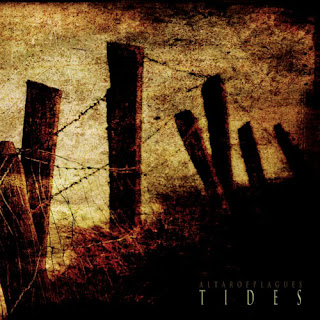 My interest in exploring new black metal has really washed out to sea in the last year. That growing tide of indifference led me to pass on Altar of Plagues' White Tomb, despite a boatload of acclaim. News that the band would cross the Atlantic for a North American tour this summer eventually nudged me to check out the EP of which we speak. Tides flipped my dinghy on the first listen, tossing my black metal ennui overboard. These two songs (clocking in at 36 minutes) will dump you straight into the fathomless freezing depths to ponder the Pyrrhic victory that is existence.

“Atlantic Light” is possessed of a tonality that rolls like a tolling bell. To my ears, these riffs manage to transcend the atmospheric black metal norm, rolling along in grand melodic gestures that are propelled by the steady drumming. There's not even that much distortion on the guitars, but that's irrelevant. There is an emotional power here that's immersive and immense. I'm fascinated by the guitar stylings on these tracks; the subtle distortion lays bare the tremolo picked notes that would otherwise blend together into a wave of noise. There are some moments when I'm positively blown away by the maelstrom of melodies that flow from these guitars.

Tides is a journey through melancholy and rage with no lifeboat. Part of the appeal of these tracks is the transposition of traditional black metal screeches with semi-sung/screamed vocals that exude a crushing hopelessness. The lyrics to “Atlantic Light” are a fascinating meditation on the mighty ocean and mankind's unceasing quest to drain it of life. “The Weight of it All” dwells in the same emotional space, pondering our ability to blissfully ignore weighty matters.

At no point during these two expansive tracks does my attention wander. I personally consider the word “drone” to be a epithet in metal, and these songs do no such thing for me. As with any decent exploration of atmospheric black metal, the excellent drumming is a cornerstone of the songs' dynamics. “The Weight Of It All” contains the lion-share of blastbeats, navigating through a bleak tempest with a coxswain's discipline and a pleasantly organic drum sound.

In retrospect, Tides is much less produced than White Tomb, and I think that's part of its allure. An excellent interview with James Kelly (over at Brooklyn Vegan) provided quite a bit of insight into the spirit of this EP and also transcribes the lyrics. White Tomb obviously grew on me and is now a cherished brick in my metal wall, but Tides holds sway over my attention. This is the music that will be playing when my ship is crushed on the shoals of life.