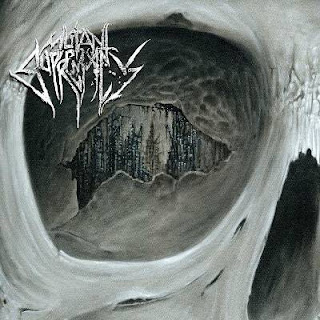 A good death metal album will power you through many an unsavory situation. An excellent death metal album will also engage the senses when you don't need to take the world by force. Infinite Suffering is such an album, an engaging confluence of riffs, rhythm, attitude and ingenuity. This celebration of anger, retribution, desecration and death proves that the old ways are still the good ways. You don't need to trawl the the metal waters and cook up a schizophrenic genre gumbo to hit the spot; just serve death in the raw.

Mutant Supremacy reek of Incantation's musty miasma and assault you with a rolling cadence redolent of Morbid Angel. Any way you cut it, Infinite Suffering emits the comforting fetid aroma of early American death you'll recognize and appreciate. Finely reticulated riffage forms the backbone of this “mutant beyond control.” There are memorable and distinctive riffs at every turn, with an astounding amount of rhythmic variation soaked into the noxious atmosphere. Excellent solos waft high above the mix and feature quite a bit of demonic mojo.

Sam Awry's vocals display a satisfying sneer and evoke a bit of John Tardy's garrulous eccentricity. The lyrics make for quite an entertaining read, rhapsodizing about the repulsive end that awaits us all. “Morbid Dismemberment” is the only track that really steps over the gore threshold, detailing the acts of a grave robbing interior decorator. A few choice moments offer singalong opportunities. The chorus of “Extinction,” in particular, compels me to scream “Onward, onward, to death” into the faces of Times Square tourists.

Robert Nelson's drumming is fluid and perfectly reflects the loose, organic meter of these songs. The lively rhythms never slip into sloppiness as they swirl and swerve below the guitars. The production on the album is arid and unoffensive, letting the putrescent olfactory assault of these tracks shine through. Infinite Suffering stands up well to repeated listens, and I don't think any fan of the old school would regret adding this to their collection.

Infinite Suffering is available from the band on CD or vinyl through their Myspace, and you can stream the entire album here.

Mutant Supremacy have several upcoming NYC shows, including an epic evening with Wormrot, Defeatist, Psychic Limb and Curandera on Sunday (10/3) at The Acheron. I'll certainly be there.
death metal Mutant Supremacy