Sunday night was a tale of two shows. They happened in the same venue, they happened contiguously and the crowds overlapped a bit, but they honestly had nothing to do with each other. Maegashira and Wizardry walloped us with some massively entertaining, doomy, psychedelic grooves. Then Evoken crushed our souls, slowly pulverizing the crowd with a mind-blowing set of abysmal death. When their set ended in cataclysmic cacophony it was already pushing past midnight; these shows didn't even happen on the same day.

I was there for the three early bands, but I wasn't totally present. My mind was occupied with the drama surrounding the show's last minute headliner. After visa issues canceled the initial dates of their first U.S. tour, this would be Wormrot's first American performance. There was just too much anticipation involved to fully comprehend the paradox of this evening’s music.

The Wormrot dudes were exhausted after their 20 hour flight from Singapore, but they were clearly excited to grind America into dust. I spoke briefly to Arif before the set, and the prevailing desire was just to scream “GO” and do this shit. But Wormrot had to wait their turn. When Evoken finished their set, some people left, but most stayed, and an entire crowd of grinders who'd been loitering outside the venue materialized. 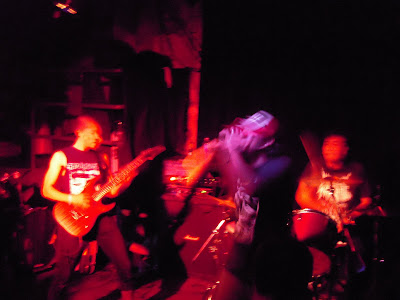 People gave a raucous yell when they heard Rasyid's guitar during the brief sound check. That same full-bodied, perfect Abuse tone was present. It made me drool instantaneously. As Wormrot started their set I think every person in attendance was plastered with stupid, slack-jawed smiles. The band raged with ease, blasting through most of Abuse, a good portion of the tracks off their new split with I Abhor, and at least one new track.


Arif is a complete fucking madman, belting out guttural gurgles and horrifying screams while treating us to strange interpretive dance moves during each and every groove. The long flight was clearly still on his mind; one song was dedicated to the pilot of their plane, and yet another was dedicated to the horrific turbulence they encountered while flying through the remnants of hurricane Earl. Arif has got those intangible front-man skills that are hard to define but absolutely essential. He asked at one point, “Does anyone here like black metal?” When folks enthusiastically cheered, Arif responded “Uh-oh,” before introducing “Blasphemy My Ass.” Wormrot are all about sarcasm.


Fitri's drum kit essentially fell apart several times during the set from the beating it was receiving. The ensuing repairs introduced some dead air that Arif broke by noting “This is why we're not rich.” Aside from those brief interludes, Fitri hammered the living hell out of the drums, effectively recreating the rhythmic perfection of Abuse. Like each of the band members, he looked at ease while fixing our broken minds. I would have liked if the drums were a bit higher in the mix (a rare sentiment at a metal show), but all told, the sound was quite excellent for Wormrot, if not a mite deafening.


Rasyid stood stone-cold serious as he deftly dispensed perfect grind riffage. He whipped the small pit into a rash of retarded collisions with his bombastic combination of speed and groove. His guitar seemed to retune itself throughout the performance, but it never sounded off. He never once touched the pegs; in grindcore there is no tuning. “Murder” probably produced the most insane action from the five or six guys who dominated the floor. During the thirty minute set Wormrot hit every track I wanted to hear and induced intense banging of the head. I was smiling through the whole affair, most likely spraying drool from my flapping lips like a hound.


This, my friends, was pure grind bliss. I can't tell you how excited I am that Wormrot are going to play again in NYC on the tail end of their tour (with a killer line-up including Defeatist, Mutant Supremacy, Phantom Limb and Curandera). I encourage you to catch this band at all costs. Wormrot toted a decent bit of merchandise across the globe, including two t-shirt designs, Abuse vinyl and the new Wormrot/I Abhor CD split. I can vouch for the excellence of the new split, which I picked up. The band played a handful of songs off of it, and they sounded fantastic live. 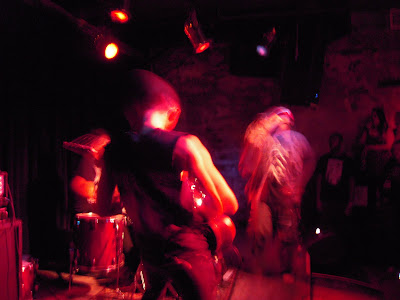 During my earlier chat with Arif, I asked about the band's travel arrangements, as I'd seen them post an advertisement for a NY based van driver for the tour. According to Arif, none other than Mike Hill of Tombs is escorting them on their American jaunt. I was in half disbelief of this tidbit until I saw the man himself talking to the band before their set. Really? Now there's a road warrior.