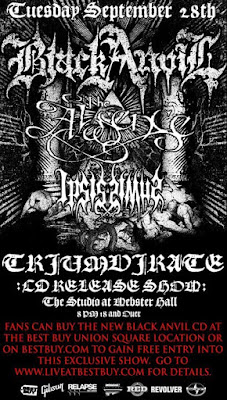 I was more than a little bit curious and concerned about this show. Put on by corporate sponsors as part of a new “Metal Night” showcase, I wondered what strings might be attached. Additionally, entrance could be gained by buying the new Black Anvil CD from Best Buy (in-store or online). Although this meant the show was essentially “free,” would this sales gimmick keeps fans away from Black Anvil's record release gig? The answer to that is no, plenty of people showed. Ultimately, the only oddity of this evening was the lineup, but the proceedings ended in complete victory for the hometown trio.

Walking up to Webster Hall, I was stunned to find a large crowd and a line of people down the block. Had Black Anvil really broken through like this? Not quite – I realized these folks were queued up for British alterna-yodelers James, who were playing in the main room at Webster. The Studio was modestly full at this point, but that would change. The only sign of corporate influence was a pile of Scion detritus that is no uncommon sight at metal shows these days. From a fan's point of view, no further corporate tithe was required to enjoy the evening.

The first band to plug in was Ipsissimus, from Connecticut. I had checked out the band's music on Myspace and was quite impressed. In addition, Mick Barr of Krallice had recommended their egregiously blasphemous brand of black metal a few weeks ago. Unbeknownst to me, these guys were recently signed to Metal Blade and are working on their debut album. 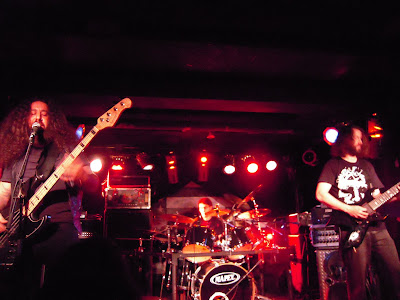 Ipsissimus have no lack of charisma. Bass player and vocalist Tichondrius is a frothing fount of bile but also displays a keen sense of humor. This is blasphemy for blasphemy's sake. Guitar player Ryan Adams (AKA His Emissary) maintains a head-down stage presence as he unleashes a tremolo picked storm. Drummer Haimatokharmes (!?) put in a preposterous performance, managing to keep up the grueling pace with panache. These songs are entertaining, bouncy affairs with quite a bit of icy melodic dynamism. In their finer moments, Ipsissimus evoke glorious thoughts of Dissection. 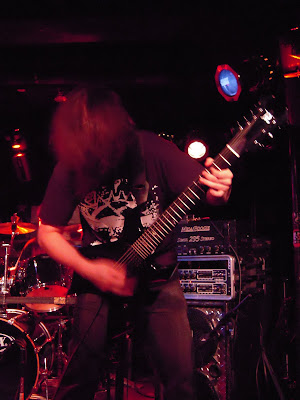 One oddity of the show was that each band seemed to have an equally large time-slot. Ipsissimus played for a good 40 minutes, and their set only dragged a bit during some extended instrumental passages. Ryan Adams' guitar tone was a bit thinner than on the recordings I heard; Ipsissimus might benefit from some additional guitar layering on stage, especially during solos. I picked up the band's excellent 2008 EP, The Three Secrets of Fatima, and I'll certainly be looking forward to their full length on Metal Blade.

The Absence were the odd men out. The band has always been of borderline interest to me, but as my tolerance for melodic death metal has declined over the last decade, that interest has faded. Be that as it may, I still wanted to see the band play live. The Absence have a new album out and have evidently been on the road playing new material to receptive ears. The crowd on this evening was mostly passive, but at the very least they were polite. Front man Jamie Stewart seems to thrive on energy, and he wasn't getting any from the audience. He let everyone know that, tossing out thinly veiled barbs about the crowd's concrete feet. To the credit of the concertgoers, this situation didn't devolve into catcalls or taunting. The band pulled off a decent set, playing a wide array of tunes while sounding taut and precise. I felt that the mix didn't do justice to the crunchy tone of their albums, but at least the guitars were audible (see Arsis' failure in this regard at the same venue). 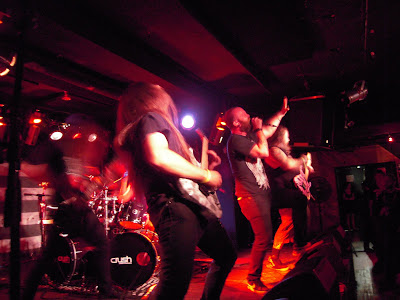 Black Anvil opened their set with a startling cover of Von's “Veadtuck” (from their 1992 Satanic Blood demo). The soaring, sibylline instrumental was a perfect herald for the chaos to follow. This would be my fourth convocation with the Black Anvil triumvirate, and it was definitely the best. The mix at The Studio was auditory perfection. Gary Bennett's guitar sported its full tonal malignancy and each note was discernible. These guys always manage to tease the best sound out of a venue. 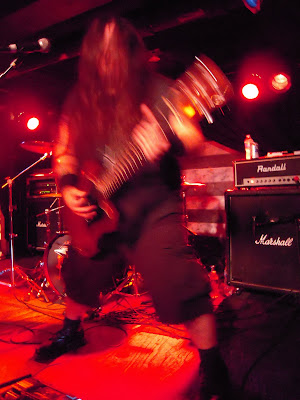 The Triumvirate tracks sounded fresh, precise and full of energy. “Angels To Dust” was absolutely pummeling and set off a raging pit in the now full venue. The song is a good example of the synergistic dynamics that drive Black Anvil. Paul Delaney may command your full attention with his manic bass attack and vicious screams, but when Gary Bennett steps up to trade off some bellowing vocals, you know that this is a team effort.


Black Anvil possess a hypnotic stage presence. Paul Delaney plays his bass as if it were a spitting cobra, and this life and death battle dominates your consciousness. Raeph Glicken is fixed with a terrifying glare as he unleashes devastating bombardments. Black Anvil beckon you to lose control, and under the thrall of their rhythmic assault, people do. For the first time in a good long while, I was compelled to take off my glasses and jump in the pit. It was worth the danger of dismemberment. 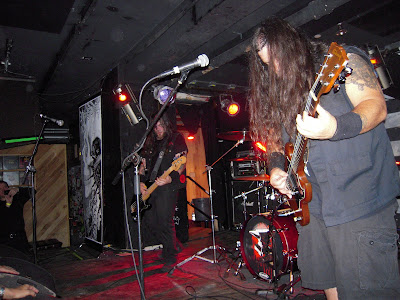 Black Anvil present an intense and cathartic concert experience. Tracks like “Dead and Left” and “Transparent” sit perfectly alongside older affairs to slake your metal thirst. If anything, the set was entirely too short for a headlining act, but such are the rules of “Metal Night.” I expect Black Anvil to win over an army of new fans when they head out on tour with Watain next month. Be there.

Black Anvil Ipsissimus The Absence The Studio at Webster Hall