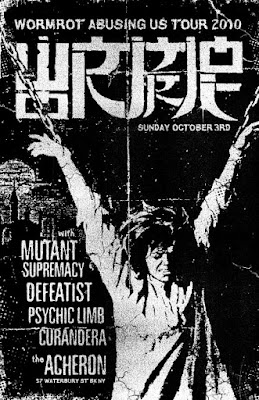 Metal is sprouting out of every rancid nook and cranny of New York City. On Sunday night, grindcore spewed from a joint called The Acheron, and it was another in a long line of venues I've not yet patronized. Situated in a veritable warehouse wasteland in Brooklyn, The Acheron closely resembles the trash compactor of the Death Star. The deep, narrow room has high ceilings and claustrophobia-inducing walls. The concrete floor is ideal for life threatening mosh pits, replete with a strange side door that opens directly into the melée. At some point during the night, the place started to fill up with water. No shitting. On the bright side, The Acheron has a nice, high stage and an excellent sound system. In a world of brutal basement shows, those last two features rank The Acheron amongst the elite.

Curandera blasted us with a dazzling display of muckified grind, frequently shifting velocity and generally making good use of the high quality sonic accoutrements. Next, Psychic Limb devoured every inch of the narrow stage with a cacophonous and spastic noise attack. Singer Brian Montuori's antics teased out smiles from the rapidly expanding and imbibing crowd. The band's vicious and intriguing tunes incited a pit into which I accidentally stepped. One quick taste of the brick wall was enough for me. I retreated to safer ground, but there's not much in the way of secure real estate at The Acheron.

Between the first two sets I made the acquaintance of Mutant Supremacy's gregarious front man, Sam Awry, as well as drummer Robert Nelson. No rock star bullshit here – just nice guys willing to talk it up with fans. No one seemed the least bit phased by the insertion of killer death metal into the middle of a genuine grind-fest. Infinite Suffering is still in heavy rotation, so I was really looking forward to this set.

Mutant Supremacy made good on the promise of their recorded music, absolutely annihilating the crowd with a hypnotic performance. “Extinction” started things off full throttle, instantly giving my neck a workout and demanding I scream along. Mutant Supremacy didn't have the most articulate mix from the soundboard. I would have liked to hear a bit more of Sam Awry's guitar in there, but it didn't detract from the destruction.

The set transported me back a good fifteen years to my early concert going days. The ripping death metal vibe reminded me of shows at long-closed clubs with line-ups chock-full of shredded carnage; Mutant Supremacy would have fit right in. I felt the same drooling jealous awe I did as a kid, witnessing professional musicians rip off complex riffs without breaking a sweat. Mutant Supremacy kill.

The Mutant Supremacy pit raged unchecked and reached its apex when the band tore into a cover of Death's “Zombie Ritual.” The guy in the Scream Bloody Gore shirt was certainly pleased. I don't have the slightest idea why Mutant Supremacy aren't signed to a label and touring the world amongst the elite.

Speaking of elite, Defeatist ratcheted up the evening's absurdity with a mind blowing display of grind warfare. The Acheron seems built to channel the sonic ethos of three-piece bands. Defeatist sounded infinitely clearer than they did when I saw them last at Cake Shop. Once again, Joel Stallings stole the entire evening with an ungodly display of drumming. He and Josh Scott comprise the most dynamic and explosive rhythm section you'll find anywhere. (Incidentally, the duo have an incredible side project called Radiation Blackbody that showcases those dynamics.) Aaron Nichols' vocals weren't particularly high in the mix, but his deceptively complicated guitar riffs sang loud and clear. The slide-stepping slaughter of “Death Holds Her Brood” sent the crowd into hysterics. Righteous.

Finally, Wormrot burnt the Acheron to the ground. Everything about this set was twice as precise, twice as fast, and twice as potent as the Bowery Electric show in September. A month on the road has transformed Wormrot into an inhuman grind machine. The crowd was berserk throughout the entire set, stage diving and otherwise beating the hell out of each other. The claustrophobic confines of The Acheron were magnified, as if someone had switched on the Death Star trash compactor in an attempt to grind us to bits.

The split with I Abhor again comprised a good chunk of the setlist, with a sweet selection of Abuse tracks rounding out the menu. The new song Wormrot debuted last month has coagulated into a thing of beauty. The band played for a good long while, leaving a bruise that will not soon fade. By now their tour is over and the 'rot are on their way back to Singapore. Safe travels, come back soon.

On a side note, I apologize for the lack of visual aides. I managed to leave my camera at home on this night. I'm not sure I would have caught anything but a blur, in any case. The kind folks at Brooklyn Vegan have risked their lives to lovingly document this show on film, so check that out over here.
Curandera Defeatist Mutant Supremacy Psychic Limb The Acheron Wormrot