These are the albums I listened to and enjoyed the most in 2010. Note that the top 10 was previously published here at Metal Injection in December. 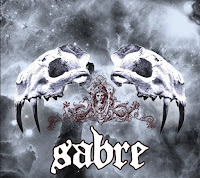 25. Sabre - Sabre (Pact Ink Records)
Sabre's self-titled debut is a solid slab of sludge and a shit-ton of fun. Riffs and rhythm throb with life and energy. Crackling guitars often speak in deathlier tones while the energetic drumming pounds the pavement. This lumbering, pulverizing beast of an LP provides an energizing experience while splashing you repeatedly with waves of muddy goodness. 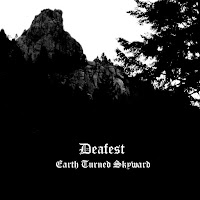 24. Deafest - Earth Turned Skyward (Ninth Meridian Records)
Deafest return with another amazing exhibition of melodic, instrumental black metal. Earth Turned Skyward harnesses the raw, natural beauty of the Rocky Mountains and focuses it into enthralling, weather-beaten compositions. These tunes crawl into my soul and whisper visions of majestic primeval forests, even as mankind chops them to the ground. 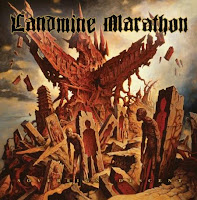 23. Landmine Marathon - Sovereign Descent (Prosthetic)
Landmine Marathon have captured the sound of radiating, scorching heat. Sovereign Descent siphons off my anger and feeds it to a raging inferno. The album's martial grooves and excoriating mid-paced massacre actually grew on me as the year progressed. I made liberal use of the album's scalding immediacy to cauterize life's wounds. 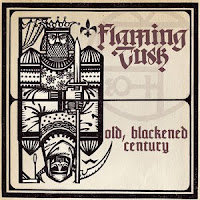 22. Flaming Tusk - Old, Blackened Century (High Water Media)
A curiously cacophonous and utterly unique concoction of lumbering sludge and memorable doomy dementia. Dueling guitars dish out splines of splendid riffage in concert with eruptions of vocal fulmination. Spiced with excellent songwriting and singed with a bit of blackness, the album finishes with a bright, nutty aroma. 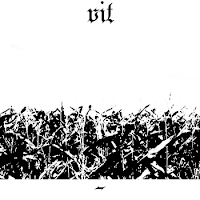 21. Vit - - (Self-Released)
This stunning album chronicles the cryptic rituals of a Cthulhuesque cult, refracted through a lens of doom, death, sludge and bottomless blackness. Vit have the uncanny ability to mutate melody and dissonance into unfathomable shapes, creating an engaging and ominous atmosphere. Voracious vocals narrate these occult proceedings while colossal riffs rip you limb from limb; you wouldn't want to get caught in the elder God's throat as he digests your soul. 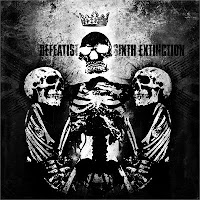 20. Defeatist - Sixth Extinction (Willowtip)
Driven by a peerless rhythmic assault, Sixth Extinction has been a go-to album this year when my soul is in need of aural violence. Defeatist purvey percussion so stunningly complex that headbanging is not an option; I just have to throw my whole body into it. I didn't expect the album to outclass so much of the year's grindcore, but that's precisely what happened. Defeatist set the bar too high for me. 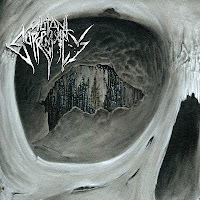 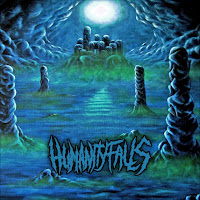 18. Humanity Falls - Ordaining the Apocalypse (Self-Released)
An experiment in unrelenting and manic creativity, Humanity Falls have unleashed a beast of an album. Gouging out the eyes of grind and death, Ordaining the Apocalypse roils with an indefatigable rhythmic rage. Cathartic, charismatic and crushing, this album is exploding with ideas I find endlessly listenable. [Out now on The Path Less Traveled Records] 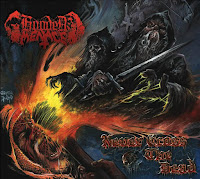 17. Hooded Menace - Never Cross The Dead (Profound Lore)
Erupting from the gurgling depths of doomy death, Never Cross The Dead hooks you with tremendous riffs and mind imploding melodies. Hooded Menace convey their vision via lumbering doom and galloping grooves, maintaining a morbid focus throughout. I continually return to these morose tales when in need of funereal entertainment. 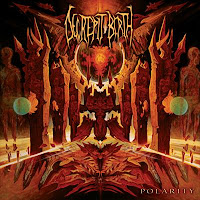 16. Decrepit Birth - Polarity (Nuclear Blast)
Polarity was my only real excursion into proper tech-death for 2010. Bill Robinson narrates a mind-expanding journey through the multiverse, with lyrics worthy of a psychedelic Michael Moorcock yarn. Decrepit Birth successfully put songwriting before technicality on this album, creating a cohesive and memorable near-Death experience. There are, of course, an absurd array of amazing riffs, all tinged with astral melodies that constantly evoke Chuck Schuldiner's legacy. Thoroughly enjoyable. 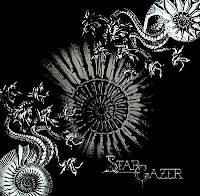 15. StarGazer - A Great Work of Ages/ A Work of Great Ages (Profound Lore)
It took me ages to comprehend this arcane conundrum of death metal majesty, but it was worth the effort. Full of cerebral riffs and esoteric compositions, the album's momentum tilts constantly. Leaning on the thrashier side of death and often flirting with ethereal melody, there's no shortage of ideas to be found. An absolutely absurd bass performance pushes this into the stratosphere. 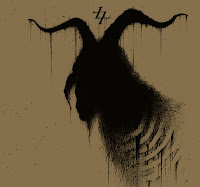 14. The Secret - Solve Et Coagula (Southern Lord)
The Secret make an immediate and oppressive impression with this grinding slab of blackened hardcore madness. Sporting some of my favorite production and guitar tones of the year, Solve Et Coagula unleashes an absolute shitstorm of righteous riffs and rage. In a bleak and blackened landscape there's nowhere to hide from the album's bludgeoning barrage. Certainly one of the heaviest LPs of 2010. 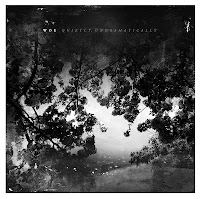 13. Woe - Quietly, Undramatically (Candlelight)
Quietly, Undramatically is a stunningly organic explosion of misery and misanthropy. The album unleashes a rolling wave of black metal might, driven by a gorgeous rhythmic fusillade . Austere but bombastic, it's given to resounding dynamics. Overwhelming emotions are held in abeyance by metal and malice, contained by unadulterated, rancorous riffage. 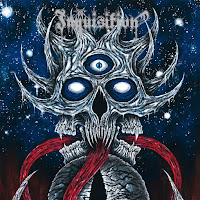 12.Inquisition - Ominous Doctrines of the Perpetual Mystical Macrocosm (Hells Headbangers)
These icy seas of black metal goodness heave with treble-heavy chords, ringing out in absurd, apoplectic and thrashy cacophony. Dagon surpasses Abbath's froggery and his riffs whip all of Immortal's output in this century. The soundtrack to a northern passage in the service of Satan, the album is filled with peculiar bendy notes and irresistible, exuberant melody. Solos sing out with sweet reverb while a pounding martial bombardment propels you into the night. Almost too good to be true. 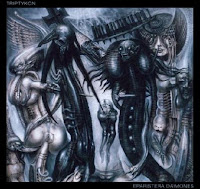 11. Triptykon - Eparistera Daimones (Century Media)
It took me a good long while to connect with Eparistera Daimones and to comprehend it as an album. Since that epiphany it has wormed into my consciousness, dripping nightmarish visions and monstrous ripping riffage into my soul. Thomas Gabriel Fischer lays bare visceral emotions through these songs, and the album unapologetically mainlines them into your body. Let it consume you. 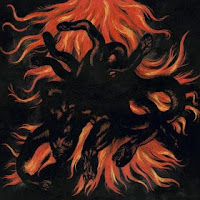 10. Deathspell Omega - Paracletus (Seasons of Mist)
Although I find Deathspell Omega's music to be fascinating and cerebral, the question for me has always been how much I actually enjoy it. Paracletus affirmatively answers that question for my ears, combining absurd riffs, astral arpeggiations and corkscrew rhythms to create an aesthetically entertaining experience. This is an album to sit and marvel at while your mind tries to untangle its intricacies. Deathspell Omega have risen above their own obfuscation to craft an album of memorable songs. 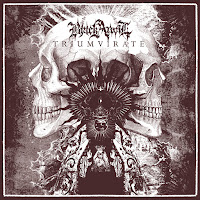 9. Black Anvil - Triumvirate (Relapse)
Triumvirate is a treatise on movement, with riffs and rhythm that provide propulsion to your ears and body. The album blasts across the soundscape with an ominous and satisfying resonance. Black Anvil give black metal some muscle and show no mercy in beating the genre into submission. The band made good on the promise of their debut album, conjoining songwriting skill with groove, power and wanton speed. I'm still enjoying the hell out of Triumvirate. 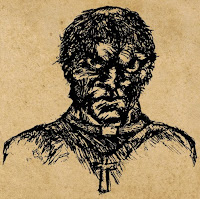 8. Slough Feg - The Animal Spirits (Profound Lore)
Mike Scalzi will consume you with fireballs from his eyes and bolts of lightning from his arse. The man understands that songwriting and riffs form the heart of the metal beast, and The Animal Spirits delivers both in style. As always, Slough Feg craft traditional metal that bangs your head and begs you to sing along. I very nearly killed myself several times while blasting this album in the shower. For an extra challenge, give it a spin in your car; I promise you'll drive better while headbanging and throwing a claw out the window. 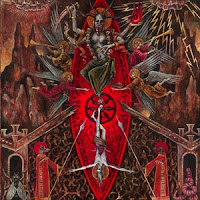 7. Weapon - From the Devil's Tomb (The Ajna Offensive)
This dark horse of an album blasted out of nowhere at the end of the year to win over my blackened heart. From The Devil's Tomb is a vile hymn in worship of the mighty riff. Evoking thoughts of Possessed, Kreator, Morbid Angel and especially Dissection, Weapon have crafted an incredible metal monument. Solos are deployed in liberal homage to the Dark Lord, reminding us of bygone glory. Vicious, varied and voracious, From The Devil's Tomb is an album you won't want to miss. 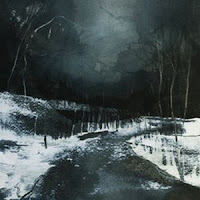 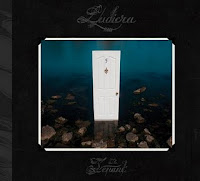 5. Ludicra - The Tenant (Profound Lore)
Astonishingly unique and neck-snappingly catchy, The Tenant drops a megaton of riffage on the constraints of black metal and shatters them convincingly. Vocals are drenched in eviscerating anguish, driving these diverse tracks into transcendent realms. The Tenant romps, thrashes and rages, all the while focusing on righteous riffs and solid songwriting. 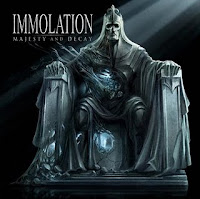 4. Immolation - Majesty and Decay (Nuclear Blast)
Immolation simply outclass a great portion of the death metal world in my ears. Majesty and Decay roils and rolls like a frigate's deck in a pitched sea battle. Riffs and rhythm unleash rippling broadsides against hapless enemies, no match for the speed and precision of this seasoned crew. The superlative drumming drives this ship though the water like a gale force wind, leaving only carnage in its wake. Majesty and Decay is a re-affirmation of Immolation's enduring legacy. Along the way it managed to renew my faith in the power of death metal. 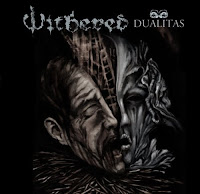 3. Withered - Dualitas (Prosthetic)
Dualitas is a ridiculous sonic experience. The album is full of battering beats and amphoric tones that resonate in my ears and in my memory. Strange bits of the album's sludgy blackness constantly appear in my consciousness, as if the album's begging to be blasted. There's a deep melancholy seared into these doomed melodies, and the careful composition and songwriting bear that out. Dualitas will leave you shattered but enlightened. 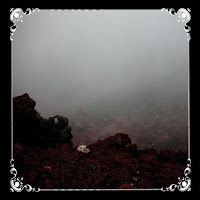 2. Castevet - Mounds of Ash (Profound Lore)
This album is a riffing and rhythmic wonder, imbued with an oscillating martial gait. The soundtrack to my year's caffeination, Mounds of Ash caused countless beats to be hammered out on any available surface. The album is somber but driving, bleak but brilliant. Dissonant melodies swirl in mutant meter, and their appeal didn't attenuate one bit with time. Castevet have laid down a formula for greatness, and I hope they make good on its promise. 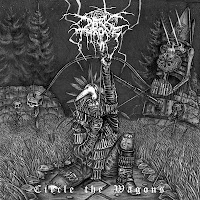 1. Darkthrone - Circle the Wagons (Peaceville)
Cause of innumerable absurd sing-alongs, Circle the Wagons is without a doubt the album I listened to and enjoyed the most this year. Playing on the prototypes of all we hold dear in metal, Darkthrone remind us that this shit is supposed to be fun. Fenriz and Ted accompanied me on many a task that required fortitude, perseverance and strength. We mowed the lawn together, battled midtown tourists together, washed dishes together, lifted weights together and even cleaned the toilet together. Let me ask you one thing, “Does it smell like a bowl of fruit?”
Agalloch Black Anvil Castevet Darkthrone Deathspell Omega Decrepit Birth Immolation Inquisition Ludicra Slough Feg StarGazer The Secret Triptykon Weapon Withered Woe