Posted by atanamar February 01, 2011
I was expecting adventure on this evening, traveling into the hinterlands of Williamsburg after another snowstorm and driving into the teeth of new snow. I got a bit more than I bargained for; I arrived at The Acheron to find it had no functioning toilet. Of all the bathroom options offered, the only one my brain could process was “go in the snow.” It worked well enough. As a DIY space, The Acheron also doesn't seem to be “heated” in any conventional sense, except by the bodies filling it. There were plenty on this evening, but it didn't stop the snow and slush from seeping into my boots, giving me the feeling of an Ardennes Forest foxhole circa 1944. The show was fantastic, and I had a great time despite my emerging trench-foot.

Xaddax started things off with an entertaining set of bizarro post-punk, noise rock madness. Chrissy Rossettie pounded the hell out of her drums, bashing out serious rhythmic absurdity interspersed with mysteriously triggered electronic samples. Nick Sakes, wearing a matching jumpsuit, matched wits and riffs with the beats. His yelled vocals added a layer of peculiarity to the performance. Very fun. 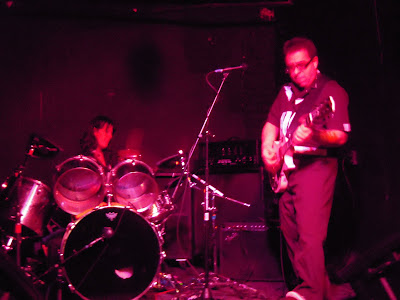 This was the best Defeatist performance I've witnessed. The trio were bubbling over with intensity, and the sound was excellent. My close proximity definitely helped. I was able to witness the terrifying stares Joel Stallings fixes upon his cymbals as he smashes them with stunning precision. The man means business; I'd hate to be reincarnated as a piece of his drum-kit. Josh Scott pulled double duty on this evening (also playing in Castevet), and his brawling, bare bass tone entwined perfectly with the abstruse drum wizardry. Aaron Nichols' guitar sounded great, allowing us to fully absorb the maniacal riffs that Defeatist dispense. The whole affair was thoroughly mindblowing. Word on the street is that the band will be recording a new album in the near future. I can't wait.


Phantom Glue were up next, playing a solid set of stoner sludge muckery. Ultimately, the band's music isn't my thing, but they played an engaging and precise set. Dueling vocals commanded our attention with riffs and solos that covered a wide range of punk/rock/metal territory. My favorite moments were the heaviest, when the band surrendered entirely to groove. Phantom Glue are certainly worth catching in a live setting. 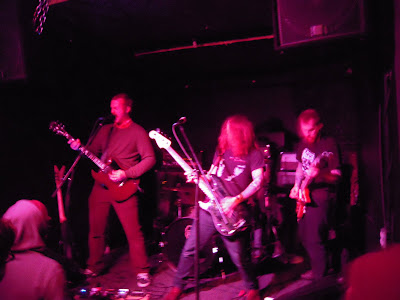 If you aren't yet convinced of Castevet's genius, I really can't help you. The set pulled entirely from the impeccable Mounds of Ash, and this was the best live representation of those tracks I've heard. Again, my proximity helped mightily; this is the first Castevet performance where I could fully grasp Andrew Hock's inscrutable guitar prognostications. These songs deliver a transcendent rhythmic and melodic purification, driven home by Andrew's laconic vocal paroxysms. Ian Jacyszyn's flawless drumming was also amazing to witness. I can't fathom how these cryptic rhythms intersect with reality, and I don't care to. That Josh Scott interjects cohesive and complimentary bass lines into the mix is beyond my reckoning.


I couldn't see the crowd through most of the show, being so close to the stage. Besides some flying hair and banging heads, I don't think a pit emerged. Everyone spent the show bundled in winter coats, which probably would have taken the edge off some pit action. Every time I turned around, I caught looks of amazement and awe (at least during Defeatist and Castevet). I probably had the same look of perplexed bliss on my face throughout. At least I remembered to avoid the yellow snow as I trudged back to my car.
Castevet Defeatist Phantom Glue The Acheron Xaddax