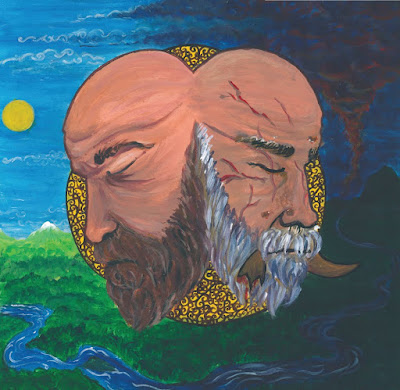 Discounting a year-long obsession with Hull's Sole Lord, my ears have drifted far afield from the world of sludgified post-metal. Naisian make me realize my musical tastes haven't completely moved on. Mammalian captures your consciousness with a bounty of engrossing riffs and concise compositions that don't devolve into background noise. Pulverizing waves of sludge are juxtaposed with ethereal progressive passages, and the results are frequently sublime. Miraculously, Naisian manage to sound neither derivative nor formulaic to my ears. Mammalian just keeps hitting the spot.

Loose and lumbering rhythms are matched to riffs that roil with a sloshing vehemence. The stuttering melodies never move with great dispatch, but keep on truckin’ in a curiously compelling dance. Aggregations of simple but mesmerizing riffs help Mammalian get trapped in the recesses of your memory. Soaring leads do a great job of accenting the swirling tonal undercurrents without ever overindulging.

The reverbed clean guitar passages weave waves of celestial melody, driven by the steadfast drums and throbbing bass; this isn't sleepytime music. These interludes aren't revolutionary in vision but are certainly captivating and never overstay their welcome. Some progified passages incorporate orchestral strings; this is tastefully done and avoids any noxious whiff of Stilton. Naisian don't have quite the calculated precision of a band like Isis, and they don't leave the massive footprint of Mastodon, but there's something compelling, memorable and original here all the same.

Dual vocals are delivered with varying degrees of growled gutzonborglum, narrating an eclectic set of esoteric tales. The breathless, staccato delivery frequently reminds me of Andrew Hock's apoplectic invective in Castevet. Clean vocals are skillfully broken out in very small measure, adding to the mixture without ruining an otherwise carefully balanced attack. The singing only oversteps its bounds in the extended title track, indulging in some wavering, wailing howls. It's not egregious to my ears, and I suspect a healthy appreciation for Mike Patton's vocal dementia should help the passage go down easier.

One pitfall of this style of music is a lack of momentum and a tendency to fall into rhythmic ruts. Fortunately, Naisian's songs are driven by manic, lively and skillful drumming, bringing to mind the bright immediacy of the sadly defunct Burst. The well mixed bass adds heft to the album's constant movement, ensuring your continued attention. The magnificent bass playing comes to the forefront during some of the more atmospheric moments, writhing in dithyrambic abandon.

Mammalian sports a sharp and unsullied production that gives room for purposeful sludgy mud and crystal clear, clean guitar acrobatics. Naisian sound like a band in the best sense of the word; this is four guys who've meticulously sculpted a titanic sonic landscape. The spirit of this collaborative creation is lovingly captured on tape.

No, Naisian aren't from Savannah, Georgia, thank you very much. Naisian call Sheffield, UK home, but I hope the band jumps the pond someday for a tour. I suspect they'd sound massive in person.

Mammalian is available on February 18th, and you can order it directly from the band here. Pre-orders of the album come with an immediate digital download.

You can check out "Fletcher-Munson" below, as well as the video for "Bellicist," set to scenes from the classic film, "Freaks."
Fletcher-Munson by naisian