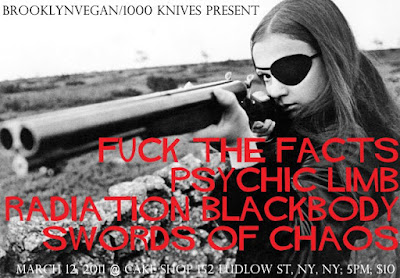 I'm developing a soft spot for shows at Cake Shop; the combination of coffee, cake and aural destruction just goes down easy. Also, I love early shows. On this evening, Fuck the Facts brought their tenth anniversary tour to town, unleashing their unique breed of bastardized grind upon an eager crowd in the Cake Shop's basement.

The first band to set up was the unassuming Swords of Chaos, straight out of Reykjavik. The show was part of the band's maiden American tour and first stop on their road to South By Southwest. A quick glance at the Swords of Chaos Myspace page before the show revealed a claim that “subliminal aural contradictions leave the masses perplexed.” The band certainly brought the contradiction, playing an eclectic blend of hardcore tinged with odd melody and rampaging rock. I was, however, much more impressed than perplexed by the band's performance. A baritone guitar stood in for bass, giving the music an oddly proggy bent. Chaos was also well represented, with the vocalist screaming up a storm while running through and around the crowd during the set. A couple of tracks featured well executed clean singing that I'd call out of place, but I think that was the point. All told, it was a fun set and a band worth checking out.


I've rhapsodized repeatedly about the rhythmic prowess of Joshua Scott and Joel Stallings (of Defeatist and the defunct Anodyne). As Radiation Blackbody, the duo let rip a ridiculously entertaining drum and bass blasting. I've found their self-titled (and freely available) LP to be a constant walking companion; the thing propels me like a battering ram. In person, this shit is just unbelievable. Joel Stallings is a draw-dropping drummer. Joshua Scott accompanies the percussive precision with rolling, rocking and ludicrous bass lines, all tinged with discernibly dissonant melody.

Psychic Limb are a fucking mystery; the band have zero internet presence. I saw them open for Wormrot in Brooklyn last year, where their unhinged, off-the-rails brand of grinding hardcore made quite an impression on the crowd. On that night it was difficult to discern exactly what was going on with their music, so I was looking forward to an up close and personal listening session.

Vocalist Brian Montuori is a living paroxysm, spilling splenetic screams all over the crowd while wantonly throwing his body around the room. The band tore through a set of blindingly fast tracks that speak of spastic chromatic riffs, crushing composition and rhythmic destruction. This is combustible and mesmerizing music that I'd love to hear in recorded form.


When Fuck the Facts played Cake Shop last year, I was blown away by their ferocious live show. This evening was even more impressive, as the band uncorked a stunning set of tracks spanning their entire career. Topon Das is an absolute beast on guitar; I have no idea where he gets these ideas and how he executes with such absurd precision. Although he seemed crammed into an uncomfortably miniscule spot on the stage, Mathieu Vilandre steered the band with indefatigable, flawless drumming. Mel Mongeon rampaged in all directions, screaming in eye-popping madness and enjoying every minute of abject invective. When he wasn't treating the crowd to incomprehensible Canadian jokes, Marc Bourgon towered above the band and audience, bellowing vocal fire and purveying barreling bass.

Excellent sound helped drive home the abstruse audio annihilation. Neck snapping grind was sewn together with moments of engrossing melody and infused with gallons of groove. I was particularly pleased to hear songs from Backstabber Etiquette and Stigmata High-Five, two albums I've been jamming a lot lately. Most importantly, I was hoping we'd get to hear some tunes from the band's upcoming LP, Die Miserable. The band obliged, closing out the set with two vicious new songs (one is captured below). Ears were annihilated and many facts were fucked; it was a great evening.