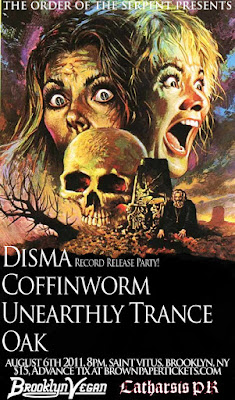 Bless me, Father, for I have sinned. It has been 96 days since my last metal show. Seriously. I broke that unfortunate streak on Saturday night by attending Disma's record release party for the titanic Towards the Megalith at Saint Vitus Bar. I was rewarded with superlative death of the old school and a surprisingly beastly set of bloodcurdling sludge from Coffinworm.

In the interregnum since I got a new job and fell off the face of the earth, Saint Vitus has risen to well deserved prominence in the New York metal scene. This well appointed bar and excellent concert space is situated in the northern wilds of Greenpoint, Brooklyn, on the very edges of civilization. As advertised, Saint Vitus is a “metal themed” drinkery, meaning metal is blasted so loudly in the bar area that any meaningful conversation is impossible. This is precisely what the clientele desire. The modest backroom (measuring roughly 2 ½ Brooklyn basements) is perfectly sized for a wide array of underground shows and features fantastic sound and views. I arrived at the end of a thundering set from the freshly unretired Unearthly Trance and found the space packed to the gills with a who's who of Brooklyn metal.


Coffinworm's When All Became None is an album that's grown on me like a slime mold. Its viscous sludge pierced by blackened-doom vibe has been hitting the spot repeatedly of late. I'm happy to report that the band and their tunes stand up well in person; in fact, they destroy. The vocalist's wretched scream and evident metalborne madness is a perfect foil to the lumbering annihilation of these tunes. In addition to fine cuts off When All Became None, we were treated to a new track (video below) that portends of good things to come from Coffinworm.


Judging by the packed room and jubilant atmosphere, Old School Death Metal is the shit, and Disma are riding the throne. I saw Disma destroy the stage last year when they opened for Immolation. Their live show was a sight to behold. At that time I had only recently acquired their cassette demo, The Vault of Membros; it hasn't left my tape deck ever since. Towards the Megalith is another story altogether. Riding a huge wave of hype, I had a bit of trouble absorbing its dense deathiness. But I've since accepted its bludgeoning goodness into my bowels, and I was excited to hear this music live.


Craig Pillard is a death metal legend, and he lived up to that billing on Saturday night. The unassuming guy belted out gurgling growls of the highest order and the crowd (including myself) ate it up. Hair was flying, necks were wrecked and a truckload of oranges were juiced. The band ably rode the fine line between taut mechanization and flailing destruction; I'd expect nothing less from such a prestigious assemblage of musicians. Towards the Megalith was played in order until the curfew cut it short, but that couldn't dampen the crowd's rabid enthusiasm. These songs were made to be played live; it was a pleasure having them rammed down our throats.