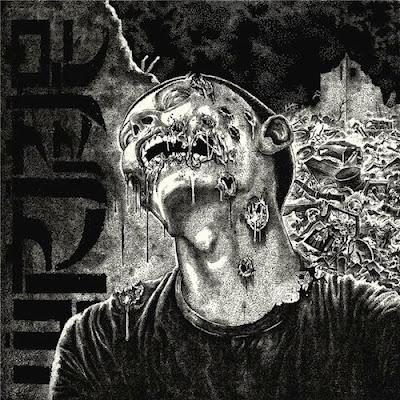 There will always be a place in my heart for Abuse, an album that revived my passion for grind and remained in constant rotation for two years. But as much as Abuse warms the cockles, Dirge has earned its keep. Insinuating itself into the interstices of my daily routine, Dirge has become the de facto soundtrack to 18 minute slices of my life. The album's treblier production and incisive riffs have the uncanny ability to cut through the din of commuter train drone, Manhattan street cacophony, subway roar and rumbling road noise. Dirge pushes punkier arrangements, chuggier chunks of distortion and some straight-up fistfuls of metal, dispensing a shocking jolt of adrenaline. Every time I crank this thing up, I feel as if I'm pissing on the proverbial electrified fence.

Rasyid seems to draw from a fathomless pool of essential grind riffage. His guitar work on Dirge remains intensely satisfying in delivery and diversity. I was slightly disappointed in the guitar tone on the album at first, but with time, I've grown to adore the bark of its mid-range distortion. These riffs intertwine synergistically with Fitri's absurd drumming to induce a feeling of falling continually down stairs, head first. Dirge is a maniacal rhythmic feast. Fitri's drumming remains primal, animalistic and inspired; he is the Keith Moon of grind in my mind.

Arif is a man of many voices, from porcine indigestion to wretchedly withered screams. He spews brilliant grind aphorisms throughout the album, constantly shifting tone in a dissociative downpour. Dirge's allure is magnified by its 'fuck off and die with a smile' attitude and brilliant lyrics. I can't count the number of times I've involuntarily screamed, “All go no emo!” while walking down the street; it's become a motivational mantra.

Abuse's magnificence was miraculous, its impact personal. Dirge's intensity is addictive, its effect a physical, utilitarian rage. Both are essential.

Earache is still offering Dirge as a completely free download here. Being a lover of plastic discs, I pre-ordered the CD before it came out.