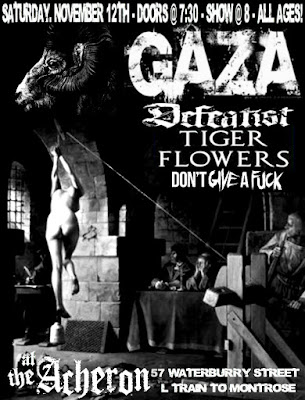 The Acheron has undergone a bit of renovation since my last visit.  In addition to fixing the egregiously broken toilet, the proprietors have blown out a wall to make room for a proper soundboard.  Unfortunately, the newly asymmetrical space isn't any more visually appealing.  In fact, the change somehow makes the cramped stage look even smaller.  Half of the bands on this night eschewed said stage altogether, using it as a glorified drum riser while playing on the floor.  Thankfully, the room's audio quality appears to have been augmented by the change.  The result was a seething evening of sonic annihilation, mandatory crowd participation and a fuck-ton of fun.

Don't Give a Fuck caught me a bit off guard.  Their amalgam of melodic, post-rock riffing and percussive hardcore extremity was a bit baffling at first.  The duo scream in tandem over a cacophonous cauldron of noise.  These guys don't peddle guitar wizardry or base brutality, but they do produce an entertaining sound. Matt Dillon's drumming was particularly impressive, especially when executed over simultaneous screams.  The band are certainly worth checking out.

Tiger Flowers' self titled EP is revelatory; it makes good on the apeshit promise of the band's live prowess.  I was righteously psyched to hear some of this new music live. I was not disappointed; the circle is complete.  All of the punchy percussive mastery, melodic mysticism and pulverizing force of the band's recorded music was perfectly transmitted on this night.  The stage was left entirely to the drum kit; the band raged in the midst of the crowd on the venue's concrete floor.  Deprived of space to roam, Jesse Madre was forced to expend his infinite energy in compact bursts of ferocity.  Howls of cathartic rage were deposited directly in our faces; we responded with smiles.  No blood was spilled, but much fun was had.  Tiger Flowers are very much worth witnessing in person.  Don't say I didn't tell you.

Defeatist's new album is also their last; the band recently announced that they'll call it quits.  This is an incredible shame; Tyranny of Decay is perhaps their best recorded work.  This evening was one of their two last live performances.  I've rambled on repeatedly about Defeatist's prowess, but this show topped them all.  The new tracks were particularly distinctive on stage, displaying a bit of breathing room that accentuates the band's hypnotic modus operandi.   Aaron Nichols' riffs had extra space to shine while Josh Scott and Joel Stallings dispensed the abstruse rhythmic rapine.  Aaron's vomitous vocals dripped with an extra bit of bile; the end is nigh.  Defeatist will be missed.

Gaza's last album, He is Never Coming Back, displayed devastating heaviness, made all the more sweet by the band's anti-religious fervor.  Death and black metal bands may have cornered the market on Bible bashing, but Gaza's straight-faced fury makes those guys seem like jokers.  The band were touring their way back home to Oregon, having just finished recording their next full-length with Kurt Ballou at his GodCity studio.

In person, Gaza are fucking unnerving.  This was my first observance of the band's absurd live intensity.  Vocalist Jon Parkin stood a head taller than the crowd on the floor, in the midst of which the band had set up.  His screams were delivered with a terrifying conviction, his body swaying precariously, one arm raised in the air, directing his wayward flock of unbelievers.  The flock ate it up, erupting into a room-wide pit of unholy jubilation that engulfed the band.  Gaza produced an absolutely massive sound, surpassing the weighty sonic heft of their recorded material.  The band's rhythm section threatened to tear the Acheron off of its foundation with tectonic force.  I can't wait to hear what Kurt Ballou does with Gaza's music.  I also can't wait to see them play again. 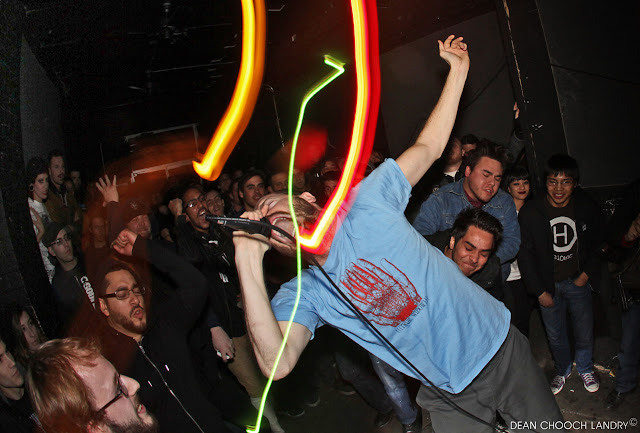 Defeatist Don't Give a Fuck Gaza The Acheron Tiger Flowers