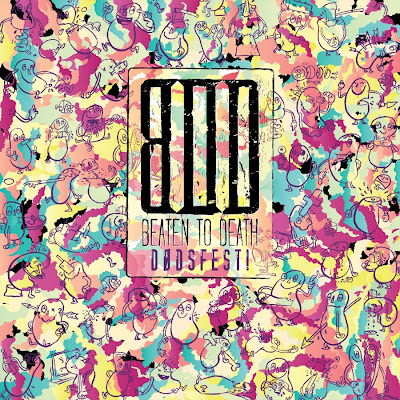 Beaten To Death give gloriously little in the way of fucks.  The band can be found assiduously shitting in the woods, just off the beaten path of metal.  I loved the band's debut, and Dødsfest! finds the band again grinding out absurdly ferocious, melodic, addictive, and categorically uncharacterizable music.

The first thing you’ll notice about Dødsfest! is the production; the guitars are barely distorted, and the bass bounces on top of the mix with ballistic pointillism.  The album has a gloriously odd center of gravity, feeling simultaneously compressed and airy.

Beyond its acoustic dementia, Dødsfest! is a rabid smorgasbord of styles, united by a disregard for convention. Beaten to Death bring plenty of blastbeaten grind to the table, mincing dissonance and speed with inhuman skill.  There are oodles of grooves and the occasional over-the-top breakdown; it all just works.  The album’s most salient feature, however, is its blatant melodicism. Indie-rock poignance is poured copiously into the album’s voracious maw.

The appropriation of cross-genre aesthetics into metal is a theme, of course (see Deafheaven).  Such purposeful and calculated maneuvers usually set off my bullshit detector, for better or worse.  Beaten to Death pull this off, somehow, in a manner that I can enjoy without twinges of misgiving.  This chaos doesn’t feel like a marketing ploy, but more like a car crash, a demolition derby for its own sake.  Follow me?

Most importantly, Beaten to Death manage to shape their ear-mangling machinations into discernable, recognizable and memorable songs.  Its lifespan is brief, but Dødsfest! leaves a mental mark.  I’m quite happy that there’s a continuity between Xes And Strokes and Dødsfest!. There’s a vision in this aural entropy; it’s just wonderfully fucked up.

Dødsfest! is out on October 4th via Mas-Kina Records.  Check out a sample below and stream the entire album here.  I expect to pick this up on Bandcamp when it’s available.