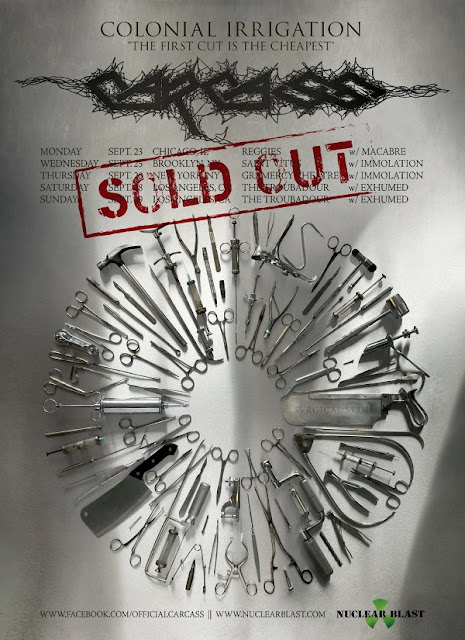 My recent concert experiences have left me with cold feelings.  I’ve been missing the suspension of disbelief, the process whereby my body surrenders to the metal and becomes a vessel of headbanging rage and rapture.  I could attribute this to jaded age, the cone of silence proffered by obligatory earplugs, or any number of grumpy excuses.  Last week that veil was pierced by Carcass and Immolation.  In addition to losing myself in the ferocity of the evening’s proceedings, I was also able to come to terms with Surgical Steel.  My relationship with Carcass’ überhyped reunion album is complicated, with roots digging down into my own metal infancy.

Heartwork was my death metal revelation, one of the first signposts on my road to hell. It changed everything, overturning the Metallica, Megadeth, Maiden, and Sepultura albums that had ruled my heart until that moment in 1993.  Heartwork became the soundtrack to my high school years, its esoteric, intellectual beauty and overt elitism setting the tone for my adolescent existence.  It’s still my favorite album of all time.

When Swansong came out, I was devastated.  My ears had pushed further into brutality; Suffocation was more my style at that point.  The heaviness, speed, and soul had been sucked from my favorite band, perhaps by the music business itself.  But Swansong was still filled with righteous riffs and songwriting mojo; it stayed in my car stereo throughout that summer before college.  As the negative reviews poured in, my consternation and contrarianism won out; I became a vocal Swansong proponent.  I’ll still defend the album ‘til blue in the face.

The first Carcass reunion tour bore unbelievable fruits; the resurrection of metal heroes had not yet become a clichéd, cash-driven industrial complex.  I could not comprehend Carcass creating new music; some sacred sarcophagi should remain sealed.  But new music was born nonetheless.  As the release of Surgical Steel approached, I steeled myself for disappointment.  It’s the way of life.  It’s just how things go.  The release of “Captive Bolt Pistol” did nothing to alleviate my doubts; all I could hear was Arsis and Soilwork and Arch Enemy and seventeen years of copycat melodic death regurgitated.  I was blinded by fear.

My first listen to Surgical Steel in its entirety was a bizarre experience.  There were sparks of brilliance, fleeting moments of old feelings, but no magic.  That first spin set off my alarms, breaking heartstrings and filling me with smug dissatisfaction.  I hope for the best but expect the worst.  This shouldn’t have been so complicated.  I had set up an impossible goalpost for the band and the album.

Naturally, I continued to listen to Surgical Steel, repeatedly and obsessively.  My misgivings faded but didn’t disappear entirely.  Could an album that compels daily spins really be mediocre?  I bought a ticket to see Carcass play at the Gramercy Theater and schlepped to the show with zero expectations.

Immolation, as always, were incredible.  But that’s a story for another story.  Gramercy was packed to the gills and roiling with energy as “1985” played over the PA.  Carcass came out and ripped directly into “Buried Dreams,” the sound a balanced clarion call of death. The chills, the fucking chills.

The setlist was glorious, but the Surgical Steel tracks stole the show.  Filled with urgency and ripping, dripping precision, the new songs fit perfectly amongst the gore-filled gems of years past.  I couldn’t stop smiling, or headbanging, or playing every riff and solo on my genuine Acme air guitar.  I lost my pretentions, let it go, and found that old feeling, “the ecstasy of enmity.” I walked out of the concert filled with much joy and neck-pain, thinking this unfathomable thought: I wish Carcass had played more new songs.  I’m sold; Surgical Steel is the real thing.

(Note: cozy up to the soundboard at the Gramercy Theater if you want a show to sound like non-shit).