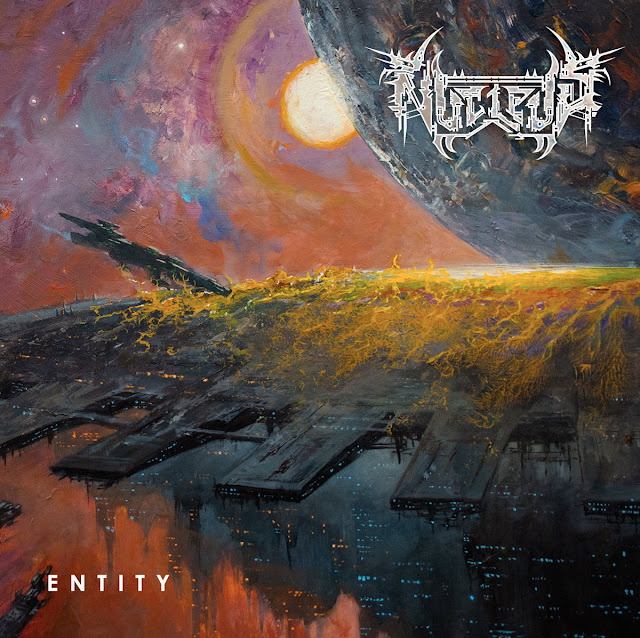 Dollars don’t lie; these are albums we bought since last we spoke:

What was once fascinating but flailing death has evolved into a cogent and concise nonnative organism.  Nucleus doff their caps and walk beyond those Demilich and Time Ghoul influences, crossing into their own demiplane.  And by own, I mean this album FUCKING OWNS.

If your music can evoke the thrower of bolts, I’ll at least take the three hour tour.  This death demands attention, alternatively whipping you like a rotor blade and then plunging you into the drink to get whacked by 90 foot breakers. I would like more, merci beaucoup.

Brevity can suck it, those immemorial gods do decree. Here, again, Esoctrilihum let loose a lengthy dictum of death-black mastery, overflowing with ideas and riffs that dump you in a fucking gravity well of macerating force.  You will NOT fall short of the dreams to destroy.

Avantgarde may rightfully get a lot of attention for putting out outre releases, but Dusktone should get some props for doing their share to promote off-the-beaten-path releases.  On their fifth full length, Dekadent plays a sort of blackened-doom with Pink Floydian atmosphere and blasts of triumphant brightness.

When I was a D&D playing, metal-punk listening teenager, the pearl clutching scolds in my parent's church set off a firestorm of satanic panic over finding a Bad Religion tape in the rec room boombox. Oh if I could go back in time and put this there instead. Hail Midnight!

An unexpected, seventeen minute slab that absolutely asphyxiates. Heavy Death entrench themselves firmly on the doomier side of the death-doom divide and this single justifies my unreasonable hype for their forthcoming full-length.

Some the angriest, heaviest, viscerally exciting hardcore I’ve ever heard. A molotov cocktail lobbed into an already political scene with an impact I haven’t felt in quite awhile.

Coffins/Second to None - Nine Cocoons Of Dens To F (Split)

Coffins are as ugly as ever. Their twisted death-doom arises from the gnarled roots of the scene. Second To None are inexpertly named: enjoyable enough but a distant second to their split mates.

If this is what NYHC is all about these days, sign me up for the pit! To the point metallic hardcore that focuses more on the quick broken nose jab than any extended beatdown.


Runemagick - The Opening Of Dead Gates

Runemagick drop a new single the same month as Heavy Death (these bands are inter-connected) and now I am beyond excited for the ultra death-doom sounds emanating from Sweden with promise of a new EP soon. Do we deserve such bounty? Who cares!

The second golden-age of thrash continues unabated despite all attempts to downplay or deny. Crush The Altar add more fuel to the raging underground bonfire of thrash with a dank, dirty demo that sounds as if buried beneath the compost of decades disregard. If you swore by what Hypnosia did, or what Ripper does, dig this up and spin forever.