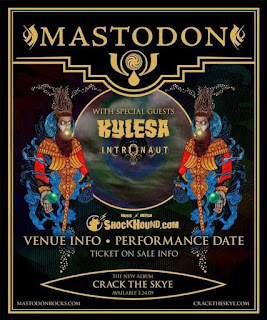 This concert had an air of danger to it. I had doubts as to how Crack the Skye would sound live. I'd seen some rough reviews of the live shows and even disconcerting accusations that Mastodon were lip-syncing on this tour. Mastodon would triumphantly trample those doubts into dust, and put on an epic performance for the ages.
Elizabeth and I met up with Dave and Jackie and got to Irving at an early hour. Intronaut put on a decent show. I'm not much into their Neurosified post-metal shtick, but I was surprised that their recorded material sounded much better than their live show. Jeanne Fury and my brother Rich showed up, and we formed the posse of power in time for Kylesa.
I was looking forward to Kylesa, and they put on a good performance. The dueling drummers were certainly entertaining. For the most part, though, the novelty of their acoustics was lost in the live setting. The sound was decent. Laura Pleasants' vocals were great, but overall I thought the band lacked some of the intensity of their recorded sound.
In short order, Mastodon came out. Irving was sold out and bursting at the seams. It had been a balmy day, and the weather inside had a sopping wet July feel to it – the kind of weather that demands cold alcoholic beverages.
From the first notes of “Oblivion,” I think everyone knew this shit was going to rule. The crowd didn't waste a moment in becoming Brann Dailor's puppets. The place was moving. 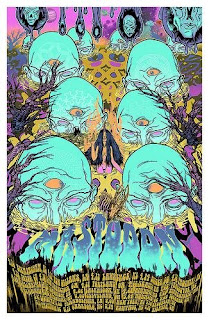 The quality of the vocal performance became evident right off the bat. Brent Hinds and Troy Sanders had to strain to hit these notes. But hit the notes they did. The effort they put into their performance was evident, and lent the vocals a more intense and energetic feel then was recorded on the album. I was not expecting the vocals to actually sound BETTER in a live setting. Unbelievable. The imperfections of the performance proved that there was no slight of hand going on here. Troy Sanders has really come into his own as a vocalist. Brent Hinds is an alien.
Crack the Skye raged from start to finish. If you've seen the band before you know there was no doubt they would slay instrumentally. Mastodon were joined by Rich Morris on keyboards (who recorded on the album) for the show, which really added to the progged out atmosphere. Brent Hinds of course shredded the shit out of his guitar. As I kind of expected, Brann Dailor's drums were more intense live. It's impossible to even describe his percussive mayhem.
Crack the Skye is almost tailor made for a live show. It has thrashing moments of moshing madness. It has chill parts where you can regain strength and acquire drinks. It even has some droning passages that are perfect for a pee break.
I think it was a pretty intense experience. I was impressed at the volatility and energy of the crowd throughout. As the final notes of “The Last Baron” faded out, I couldn't believe there would be a second set of older songs. Bands just don't do stuff like this anymore. Perhaps the attention span of metal folks has waned. Maybe metal fans are just getting old. I can't recall a marathon metal experience like this since Chuck Shuldiner pummeled Coney Island High for 3 hours on a night of complete Death in 1998. On to round two.
I think Mastodon over-toured for Blood Mountain, and I definitely attended one too many of their shows for it. The last time I saw them, their mailed-in performance was blown off the stage by co-headliners, Against Me!. Despite that fact, the pile of songs they played off Blood Mountain sounded fresh and energetic on this night. Maybe that's because they played each song at warp speed.
The set list played out in reverse chronological order. Unbelievably, the crowd got rowdier with each progressively older track. At one point I was so hot and thrashing so hard that I almost ripped off my shirt. That NEVER happens. “Iron Tusk” and “March of the Fire Ants” put an end to the evening in fine fashion. I don't know how the band did it, I don't know how the crowd did it, and I'm surprised to still be alive. Definitely one of the best shows I've ever seen.
I have to give shout outs to Dave and Jackie for hitting up this show on their trip out from SF. Unbelievably, they rocked the Brooklyn show on the following night as well. Fucking troopers.