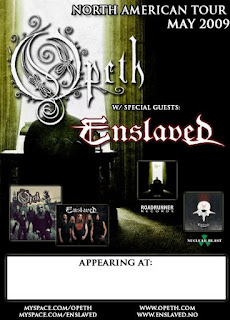 I'd like to start out by saying that the Grand Ballroom can absolutely suck it. Terrible venue. After making us stand out in the rail well past the “doors” hour, we were told it was “house policy” that we couldn't bring in umbrellas. We were instructed to toss them in the trash. Each and every attendee was treated like a criminal. More personal items (lighters, etc.) were confiscated than on an airport TSA line. I used my keen wits to befuddle the security guards and held on to my umbrella. I don't like to throw away things I paid for.
After surviving our full body cavity search, Jeanne Fury and I waited in line for an elevator to take us to the 6th floor, where the “ballroom” was located. Some intrepid metallers braved the stairs.
I was originally interested in this tour to see Enslaved. This would be my 7th (!) time seeing Opeth, so the opener is what pushed me to buy the ticket. Enslaved had canceled a headlining tour of North America earlier in the year. As the show approached, however, I started seeing some of the recent Opeth setlists and getting psyched. Opeth are a band that very rarely varies their setlist. This time was different.
Enslaved came on just as we reached the 6th floor venue. The room was half full, and it became immediately clear that the sound was going to be terrible. The “ballroom” was in fact a spiced up, carpeted gymnasium with awful acoustics and a shit sound system. Enslaved seemed very flat to me. Their latest album, Vertebrae, has not grown on me at all. In fact, I think it's pretty boring in the end. You could barely hear the guitars in the mix, which didn't help. I did my best to get into the set, but it just wasn't happening. The setlist came exclusively from their last 4 albums. This was a stark contrast to their intense headlining show in 2007 where Enslaved treated us to black metal madness dating back to their first album. The crowd, to their credit, responded well to Enslaved.
Without further adieu, Opeth came out and launched into “Heir Apparent.” Only Mikael Åkerfeldt could triumph over such terrible sound with complete perfection. The setlist was just awesome. “Godhead's Lament” reminded me that Still Life is my favorite Opeth album. Hearing “Karma” off of My Arms Your Hearse was just fantastic. “Hessian Peel” slaughtered. Fredrik Åkesson has truly come into his own and become an integral part of the Opeth beast. This was, amazingly, probably the tightest the band has ever sounded. Mikael Åkerfeldt was pitch perfect and as hilarious as ever. The crowd never got tired of screaming his name and yelling out various offers of sex. Seriously, is any man in death metal the target of so much homo-erotic love as Mikael Åkerfeldt?
Throughout the entire set, one fine fan in the balcony was letting out amazingly gutteral and long winded growls. After a while it became the most hilarious thing. I couldn't stop laughing. The man sounded like a demon. Kudos to you sir.
“Closure” off of Damnation turned into an extended prog-jam that then mutated into an homage to the Hendrix song “Third Rock From The Sun.” It was one of the coolest things I've ever seen live. “The Night and the Silent Water” aptly represented Morningrise, and “Lotus Eater” brought the set to a close. “Demon of the Fall” was the inevitable and predictable encore. I have no idea why fans insist on this. There are plenty of other “heavy” Opeth songs that could be an encore. Personally I'd love to see “Serenity Painted Death” in that spot.
Either way, it was a tremendous performance in sub-par conditions. On the way out, I used my contraband umbrella to perpetrate evil deeds. Seriously, what was I going to do with the thing – bludgeon someone? In the end, my favorite kind of ballroom is still Ballroom Jeans.