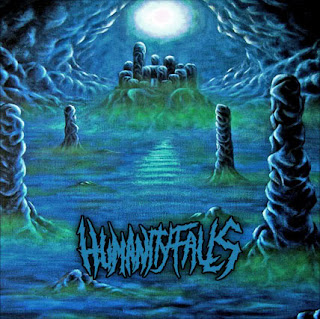 The word “experimental” makes me flinch when used to describe music. I'm not usually partial to any deliberate re-engineering of the metal genome. Humanity Falls, however, have cooked up a compelling transgenic beast of an album.

So what is the experiment here precisely? Take the unhinged rhythmic essence of Discordance Axis, splice in some slap happy Gorguts DNA, some chop suey Suffocation brutality and add a bit of otherworldly Immolation anti-melody. Lastly, inject some absurd Larry LaLonde guitar madness and see where it takes us. If this doesn't sound appealing to you on paper, you should stop reading right now.

Before I skip off on an ecstatic exegesis of Ordaining The Apocalypse, you've got to know that this is a self-produced affair. The mix on the album is raw but ultimately comfortable and punchy. I wouldn't mind if the guitar was a bit further in the forefront, but the organic recording draws out a genuine vitality that might otherwise be squashed.

Any exploration of the Discordance Axis aesthetic would be DOA without some righteous drumming. Edward Bednarek definitely has what it takes. He's got a lock on that unrestrained, whip-crack Dave Witte vibe, overflowing with lightning fast fills. Although Ordaining The Apocalypse has a loose, click-track be damned soul, the drumming here sounds nothing short of amazing to my unprofessional ears.

Most of the experimental spirit on Ordaining The Apocalypse is expressed through the guitar work of Ammo Diaz. “No Room For Ingenuity” kicks off the album with slip n' slide Gorguts riffs spliced onto a grind corpse. Absolutely incredible, tight grinding death metal riffage frequently unfurls into free-form noise before coiling back around the taut drumming. Strange melodies seesaw over raging blast beats to create a pleasantly unsettling atmosphere.

Eston Browne's guttural roar bears an uncanny resemblance to Frank Mullen in his prime. His voice lends a more brutal air to the proceedings, emanating menace and madness. Floating on top of jack hammer drumming and inhuman riffage, Eston's insane screams churn up a perfect storm of rage. The subtle lyrics deal with persecution, madness, occasional savage violence and unsurprisingly, the apocalypse. An anti-religious sentiment is also enjoyably prevalent. As you can surmise, the subject matter runs more towards the band's death metal heritage, which is fine with me.

Crushing riffage and insane drumming are at the core of this chromosomal curiosity, but some of the best moments on Ordaining The Apocalypse are also the strangest. There are times when the curious riffs make me think distinctly of Primus (minus the bass, of course). “Denounced Manifestation” features a wide open back end where Edward Bednarek lets loose some absurd, freewheeling drum patterns while Ammo sautés some frizzle fry magic. It's superlative. “At The Temple of Everlasting Condemnation” is a tremendous clean guitar instrumental that could have come from the hands of either Gustavo Santaolalla or Trey Azagthoth. The echoing cathedral consonance is a perfect break in the album's brutality.

Ordaining The Apocalypse is an engaging experiment in unrestrained discordance, but constituted of a surprising cohesion. There's a solid sensibility couched in the adventurous nature of these songs that I appreciate. I've been enjoying this album a hell of a lot; many imaginary citrus fruits have met their demise during my listening sessions. I can't help but wonder how Humanity Falls would sound with a full studio treatment. Would a “clean” and vigorous production suck the life out of these tunes? I'm not sure, but I'd love to hear it. This band has tremendous potential, and they kill live.

Humanity Falls have just recently signed to The Path Less Traveled Records, and the label will release Ordaining The Apocalypse this fall. In the meantime, you can stream it in its entirety on the bands Myspace.