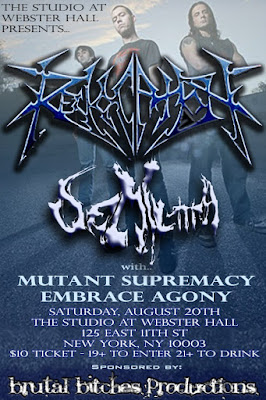 Revocation don't fit neatly into metal's Venn diagram.  They're not exactly death metal, and they're not exactly thrash.  They don't dabble in the “taking it seriously” world of cvlt credibility, but they don't  belong to the djentified morass of “modern” metal.  These distinctions matter little to me; I simply enjoy the band's music.  The ambiguous allegiances, however, ensure that a Revocation concert is a sociological Petri dish.  Regardless of the diverse clientele at their shows, Revocation are monstrously entertaining on stage.  The band recently visited New York in celebration of their newest album, Chaos of Forms.  The captivating experience transcended any and all social concerns of the motley crowd; we were unified by metal.

I love me some Mutant Supremacy, and evidently I'm not alone.  The Studio at Webster Hall was absolutely jammed with folks stoked on the sounds of old school death.  Infinite Suffering was one of my favorite albums of 2010, and its distinctive tracks continue to rip in the live setting.  Sam Awry and company blasted barbarically through a set of older songs and a handful of new ones that deserve an expeditious recording.


Despite the fury of the band and its fans, I couldn't help but be distracted by the sound.  Webster Hall is frustratingly capable of both perfect audio transmission and awful muddy landslides of fuzz.  Mutant Supremacy's set suffered from the latter, but no one in the seething crowd seemed to notice.  Onward to Death.

My last live experience with Revocation was a rapturous affair that almost left me paralyzed.  On that night the pit consisted only of myself and a couple of hapless drunkards.  We had a great time while the rest of the crowd stood stock-still.   The band have since found their audience, and Webster Hall was a writhing metal mass on this go-around.  The PA was absurdly loud, but David Davidson's riffs cut a clear swath through the air.


Revocation seemed more reserved on stage for this performance, as if their self-consciousness has increased with their fame and fan-base.  They shredded with abandon a year ago as if they had nothing to lose.  Now the stakes are higher and the band seem to be working harder on audience interaction.  The results were sometimes awkward, but never faulty or distracting.


The short headlining set focused on new compositions off Chaos of Forms, interspersed with an excellent helping of Empire of the Obscene and well worn tracks from Existence is Futile.  Every riff and lead was executed with heart-stopping precision.  It's easy to lose yourself in the Revocation live experience. The band induce a satisfying suspension of disbelief.  I'm not standing in a room with a bunch of people listening to music, I'm experiencing an organic, transporting metal experience.  Don't mind the air guitar, I can't help it.