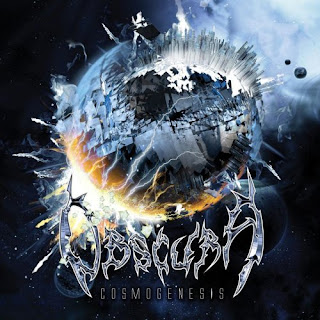 If I were 18 years old, this would be my favorite album of the year. Obscura are "progressive death metal," meaning they play painfully complex riffs at high speeds in odd time signatures while gargling marbles and soloing constantly. This could go one of two ways. The album could be a soulless wank-fest, or it could rule. Surprisingly, Cosmogenesis leans towards awesomeness.
I seem to have drifted away from this kind of music in my old age. I couldn't even get into the latest Cynic album. Somewhere out in the "Noospheres," though, Chuck Shuldiner is banging his head in approval.
The vocals seem to come in three varieties. Guttural growling is interspersed with a voice that channels ole' Chuck himself. Some sparse and tastefully placed clean vocals appear, highly synthesized (think Focus) but melodic nonetheless.
There is much fine riffage to be found here, and an Individual Thought Patterns vibe rules the day. Still, I think it would lack soul were it not for some more melodic Gothenburgness that takes the edge off. Jeroen Paul Thesseling (Ex-Pestilence) massages his fretless bass all over the mix, adding some special sauce and ensuring that sound dynamics actually exist. Speed, thankfully is not always the object. There is a nice swing at times, and some sweet grooves.
Lastly, the lyrics seem to be about, um, astrophysics. Or something. That's cool in my book.

Obscura will be on Tour with Cannibal Corpse, The Faceless and Neuraxis in April.