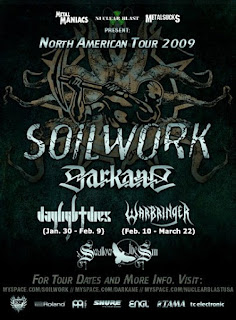 The Chance is where eardrums go to die. A converted 1920's movie theater, the acoustics leave much to be desired. On this night it was a battlefield of auditory destruction.
My brother Rich and I showed up in the middle of Swallow the Sun's set. Their brand of doomy, atmospheric melodic death metal came across pretty well in the live setting. They actually had the best sonic mix of any of the bands this night.
Next up were Los Angeles thrashers, Warbringer. Rich and I are fans of their first album, War Without End. These guys looked like they'd been on tour for 23 straight months, and hadn't seen a shower in ages. Warbringer completely tore it up, and looked like they had a blast doing it. Singer John Kevill reminds me of a young Mike Patton on stage. They played some new songs from their upcoming Century Media release, and had no problem getting the crowd into it. A couple of songs into their set, Rich expressed admiration for the the lead singer's sneakers. Yes, my young apprentice - ancient white Reebok high tops with no shoe laces are your first step on the path to the dark side. Just add a mangled, sleeveless "Altars of Madness" shirt and you will be consumed by the metal.
After their set, the band hung out at their merchandise table to have some beers with fans and to sign autographs. Rich, already several beers in, asked equally intoxicated singer John Kevill -"will you sign my brother's boobs?" That got some good laughs while earning Rich drunken high fives and metal handshakes from the band. The bromance begins.
Darkane came on, and sounded pretty decent. I'm not a fan of their latest release. These guys walk that fine line of sounding damningly European. They take their music very seriously. The keyboards are a bit too serious. Throughout their set, the guys from Warbringer hung out in the crowd. They collected a copious number of "YOU GUYS FUCKING RULE!" and "WARBRINGER!" shout-outs.
Finally, Soilwork came on. Their intro music was the beginning of "Baba O'Riley." That's pretty awesome. Unfortunately, the sound was awful. I always wear earplugs to concerts, and almost always take them out for the headliner. I had to leave them in for most of Soilwork's set. The volume was well beyond anything the human ear can process. I've been to a lot of shows, and this was amongst the most aurally painful.
Soilwork ran a poll on their website so fans could vote for 10 of the songs they'd play on this tour. I could never get the voting website to work, but the resulting songs were fairly predictable. Most of the set came from Soilwork's last 3 albums, with a smattering of older songs thrown in.
The band, reunited with long time guitarist and songwriter Peter Wichers, sounded great.
I think that singer Björn "Speed" Strid is one of the best frontmen in metal right now. Despite the cacophonous mess of sound and problems with the stage monitors, the man was pitch perfect while singing the clean parts. His screaming voice was every bit as harsh as it sounds on the albums. With the exception of Mikael Åkerfeldt, the majority of clean/harsh metal singers out there can't do justice to their studio sound in a live setting (especially Anders Fridén).
Peter Wichers and second guitarist Sylvain Coudret ripped out wicked solos and generally looked like they were having a good time. Despite the sound, Rich and I also had a great time.
The fun didn't end when the house music came on and the lights came up, however. Outside the Chance, Warbringer vocalist John Kevill was waiting for a few more bellowed shout-outs and metal embraces. Bromance indeed.