Wolves In The Throne Room – May 22nd – Europa, Brooklyn 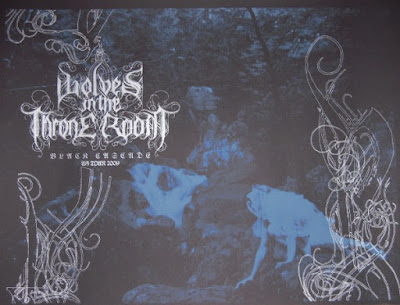 I showed up to Europa just as Thrones was finishing. I didn't have any particular interest in the openers this night. I was there strictly for the grim Cascadian black metal horde.
A Storm of Light put on a decent performance of droning doom with an excellent visual display throughout. The best moments of their set, for me at least, were when they were joined on stage by female vocalist Nerissa Campbell. Clearly she was no amateur and offered a powerful presence to the tracks. It was my secret hope that she'd join Wolves In The Throne Room later on to help out (this was not the case).
So, Europa. The place is certainly interesting. The venue is basically a dance club. The stage is very small and the sound system isn't particularly geared towards acoustic excellence. As would be expected, the speakers were aimed very much towards the low end of the audio spectrum.
It's been a long while since I saw a headliner setting up their own equipment. The stage was so small that WITTR couldn't set up their gear before-hand. Right off the bat, this humanized the band. Actually, things were already demystified for me when Nathan Weaver sold me a tour t-shirt.
WITTR finished setting up and lit a ton of candles, placing them around the tiny low stage. After some tense discussion, the band convinced the venue to turn off all of the strange dance club mood lighting. The desired effect was finally achieved. Things felt tense. Nathan Weaver seemed like a ball of energy about to explode and none too impressed with the venue. Finally, WITTR started to play.
If I recall correctly, “Wanderer Above a Sea of Fog” started off a set heavy on new material. The band absolutely raged, but the sound was awful and impossibly loud. Most nuance to the guitar was wiped out by the bass heavy mix. You could actually barely hear the drums at all. When's the last metal concert where you couldn't hear the drums? Earplugs helped out a lot – I could distinguish much more of the guitar sound and hear Aaron Weaver's drums. I feel that the dynamics of a lot of their new material is really driven by the drumming, which made the situation that much worse. I don't actually know who the bass player was, but the bass was very high in the mix ended up being distracting for the vast majority of songs.
The venue was packed and the crowd was moving more than I thought it would. Speaking of the crowd, this show drew a diverse cast of characters, including a fair share of painfully cool hipsters. I would complain more, but seriously, I'd rather a show be packed with hipsters than empty. To each his own.
Nathan Weaver is a wild beast on stage. His picking hand is moving at absurd speeds at all times. Will Lindsay also provided an excellent stage presence and did a great job sharing the vocals on the newer tracks. Aaron Weaver really is amazing. I just wish his drumming performance had been easier to appreciate.

I was happy to hear some of my favorite riffage from Two Hunters during the set. I suppose some of the songs must have been shortened in some manner for the show, but the tracks from Black Cascade really sounded fantastic live. Overall, the performance was engrossing and induced headbanging throughout. The best treat for me was when they closed with “Queen of the Borrowed Light” off of Diadem of 12 Stars. It suffered ever so slightly from lack of female vocals, but it's one of my favorite WITTR songs and had the most moshable riffs of any track that night. It was a wise decision. Overall, I had a great time at the show. It's a shame that shoddy sound diminished the evening, but WITTR still reigned triumphant. I can't wait to see this band again in the future. Their rapid rise in popularity should ensure a better venue on their next visit to NYC.

Here's a video of the band performing "Ahrimanic Trance" from the show:


In fact, you can watch a video of what appears to be almost the entire show here:
A Storm of Light Europa Wolves In The Throne Room