Swashbuckle - Back to the Noose (Nuclear Blast Records, 2009) 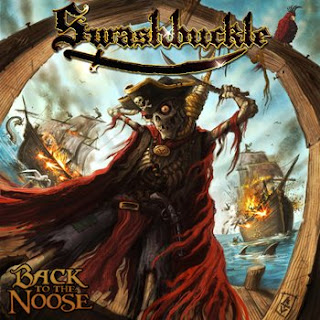 I think the barrel of original riffage has run completely dry in the world of thrash. If you want to wade into it's resurgent waters, then you've got to subsist on character, songwriting skills and pure metal energy. Swashbuckle took the riffage barrel, filled it with grog and spewed forth one of the most entertaining albums I've ever heard.

Back to the Noose is certainly not the best album of the year, but it is without a doubt the most fun.
If you're going to dress up like a pirate, strap on your guitar and thrash, this is how you do it. I haven't paid much attention to buccaneering in metal thus far because it's been plain awful. What I've heard has been tainted with weak keyboard Velveeta and noodling, never-ending solos. Swashbuckle pilfer the fucking cheese and eat it.

"Hoist the Mainsail" starts off the album with an epic acoustic passage that foreshadows the glory to come. "Scurvy Back" thrashes hard and showcases the excellent guitar tone, bass sound and production of the album. It's sometimes hard to believe these guys are a three-piece. "Back to the Noose" kicks in with the the motivational phrase - "Let it rip!"

"Cloudy with a chance of piracy" is the first of several acoustic "sea shanties" that are interspersed throughout the thrash. This would reek of wretched Roquefort if they weren't executed with pure calypso brilliance. I half expect my boy Harry Belafonte to appear and bust out some tunes about coconuts and bananas.

I guess this is the point where I should issue a disclaimer. My dad's side of the family is French by way of the U.S. Virgin Islands. An ancestor is told to have been a pirate of some repute. My wife and I are known to fly the Jolly Roger from our house at times. Buccaneering runs in my veins. This, however, is the first time that spirit has been awoken by metal. So clearly I'm biased.

Back to the Noose is filled with top of the line thrash riffage and rhythms. The sound deviates occasionally towards more melody or more death. These variations are always perfectly executed. "Rounds of Rum" channels Clayman era In Flames riffs to great effect. "Whirlpit" starts off with a riff that dials up Trey Azagthoth for a few brief moments. But in the end, how the hell can you beat a song called "Peg-leg Stomp?"

The vocals tend to lean a little towards the guttural and deep side, which is fine for me. The lyrics are ridiculously awesome, and most every song has a gang-style sing along chorus. How can you help but yell along when the chorus is simply "Grog Box!"

Shit man, if you can handle this shtick, and enjoy a good thrashing, you've got to pick up this album.

The entire album is temporarily streaming at the band's myspace page:
Swashbuckle Myspace