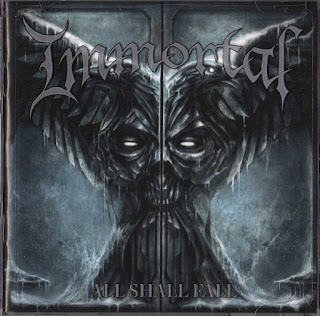 I was expecting a lot from a new Immortal album. I was probably expecting too much. What I didn't expect was an album so close in spirit to Abbath's side project.

As with many things in life, All Shall Fall sounds best when you check your expectations at the door. On initial listens, my brain was racing, trying to map out the new Immortal landscape. It's a waste of time; All Shall Fall is a great album.

During Immortal's hiatus, Abbath released Between Two Worlds under the moniker of I, along with Ice Dale, T.C. King and Armagedda. It was an excellent album of blackened power metal by way of Quorthon tribute that I still listen to regularly. I expected that Abbath would shun this direction entirely upon reforming Immortal, but I was wrong. The first song and title track on All Shall Fall would fit right into that album.

What does this mean? Immortal was always about battle and triumph. I think the triumphs here are no longer quite so grim. Perhaps they are a little bit happy. Abbath has synthesized the pure and simple joy he found on Between Two Worlds into a new Immortal. It brings a smile to my face, at least. All Shall Fall is a celebration of something joyous that eschews the misanthropic essence of black metal.

One of my first impressions of the album is that the production is askew. It seems to lack a low-end punch. The patented swarming guitar sound seems to be mostly missing. But having seen Immortal live, I know that's not how they sound in person. Perhaps their older albums were unnaturally compressed? Either way you cut it, the result on All Shall Fall is closer to their live sound. That's fine with me, but it did require an adjustment period.

The riffage here is pretty good. Perhaps it's not up to the absurd level of my expectations, but good nonetheless. The clean passages are excellent and inspiring. There are moments of sheer guitar brilliance sprinkled throughout the songs, but they are not constant. Make no mistake, an Abbath slightly off his game is still better than most of the players on the field.

One of the biggest things you'll notice on All Shall Fall is a general downshift in velocity. Many of the tempos here are mid-paced. This creates a stark contrast when Horgh turns on the speed. The result as a whole is a greater sense of dynamics throughout. I think contrast is the main theme of the album. All Shall Fall is all about movement - light and dark do differ here.

So what's the verdict? You'll get up out of your seat and squeeze the oranges, I'm sure. Be sure not to over-analyze. Just sit back and let yourself be frozen by the Icewinds from your stereo.