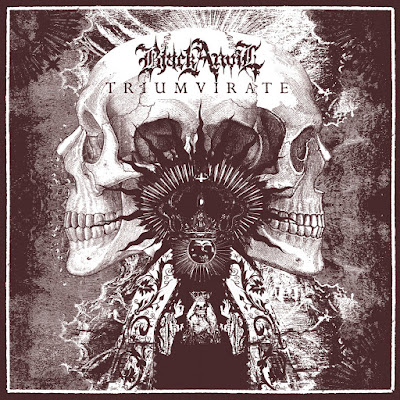 Triumvirate came as quite a surprise to me. Black Anvil have evolved at a rapid clip, taking a step past the palm-muted, Morbid Tales informed chugging of Time Insults the Mind. That album galloped and grooved, dispensing death from horseback. Triumvirate barrels along like a locomotive, mercilessly mowing you down and only occasionally slowing the pace to hose blood off the cowcatcher.

Black Anvil have a certain street-smart, common sense approach to songwriting that really appeals to me. I can't tell you how much I appreciate songs that are catchy, memorable and crushing all at the same time. The band's black metal ambitions are free from dissimulation. This music simply kills, radiating a genuine desire to triumph and destroy. “What Is Life If Not Now!” is a statement, not a question. This veritable Zen koan of a song kicks off Triumvirate with prodigious force and purpose.

The production on Triumvirate is on a completely different plane from the band's debut. It sounds as if someone scraped off a layer of crust to reveal a gleaming monstrosity. Gary Bennett's guitars are huge and enveloping, Raeph Glicken's drums are mixed to perfection, and the bass is particularly percussive. If anything, Paul Delaney's vocals sounds twice as venomous on this album. The lyrics read like an evil poetic psalm, eloquently annotating an impious theosophy.

Triumvirate is filled with riffs that roll relentlessly down the tracks, alternating tromolo picked propulsion with sections of crushing combustion. The railway is not always straight; this train hits some pleasantly unorthodox melodic curves that don't derail the menacing atmosphere. Gary Bennett's predilection for spectral arpeggiation has become a pleasant trademark of the Black Anvil sound. “Dead and Left” sports a Christ-crushing, hammered on riff that gets me up out of my seat and sends me sprinting around my house in hysterics. “Angels To Dust” drives home a memorable melodic riff, then lets loose a rhythmic bombardment that does wonders for wrecking my neck.

I'm not fucking around with the train metaphors; I don't think I've ever heard an album elicit such a distinct sensation of raging along the rails. Be that as it may, Triumvirate is in no way limited by the sentiment it engenders. It's merely the sign of a perfect rhythmic execution of some damned fine tunes. If my constantly growing enthusiasm for Triumvirate is any indication, it will certainly end up as one of my favorite albums of the year.

Triumvirate comes out on September 28th in America and the band will be playing a record release show that night in NYC (details here). I'll be there. After that, the band heads out on a month-long tour with Watain and Goatwhore in November.