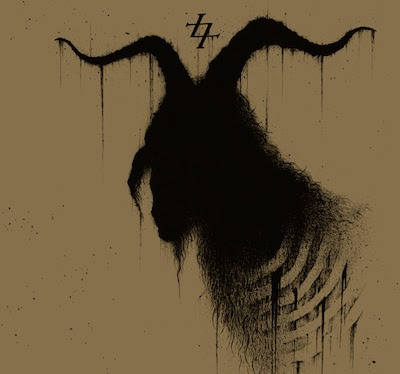 The Secret dispense with the icy cold black metal aesthetic, instead churning up a hot, humid tropical depression. A fetid breeze wafts scents of sludge over arpeggiated darkness with “Cross Builder,” and we get our first glimpses of the boiling demonic voice that will narrate this tempest. The offshore winds slowly gain strength before engulfing you in a teeming downpour of rage with “Death Alive.” Here the curious nature of this music fully reveals itself; the Secret are a perfect storm of hardcore riffs doused in dissonant darkness, tossed with frenetic drumming that shifts between thunderous hammering and bludgeoning blastbeats.

Tracks like “Weathermen” bring occasional lulls from the lashing blackness, slowing enough to let pools of viscous ooze flood the landscape. “Eve of the Last Day” brings a rare bit of tremolo-picked siren's call, certainly evoking Black Anvil before beckoning us to smash everything in sight with a doomy stomp. ”War Desire” follows a similar path, calling our attention to a minor keyed melody that floats above the tune before dragging us down into an atonal slaughter.

Marco Coslovich's vocals lead us into a cathartic cyclone of anger, taking aim at religion, society, war and the egregious excess of modern life. We're encouraged to burn it all down and walk away. The album's title invokes a dictum of medieval Alchemy, literally imploring us to “separate and join together” or “dissolve and coagulate.” I suspect this sentiment is in no way conciliatory; there's nothing redeemable about our world. In “Pursuit of Discomfort,” Mr. Coslovich informs us that “The only choice that we're free to make is to find the right circle of hell.”

Forged in their native Italy but recorded by Kurt Ballou at his Godcity Studio, Solve Et Coagula is gorgeously produced. Michael Bertoldini's char-broiled guitar tone has a guttural gravitas that unsurprisingly sparks thoughts of Converge. Enrico Uliana's bass pulsates with distortion and adds heft to Tommaso Corte's rhythmic siege. Through it all, Marco Coslovich spews vitriolic diatribes in a voice that is nothing short of filthy.

Hardcore has made many new incursions into metal of late, but this experiment appeals to me much more than the endless splicing and dicing of Entombed DNA. Solve Et Coagula's appeal is immediate and visceral; I want to throw wide my arms and let this storm of anger wash over me. Now come tour the United States, please.